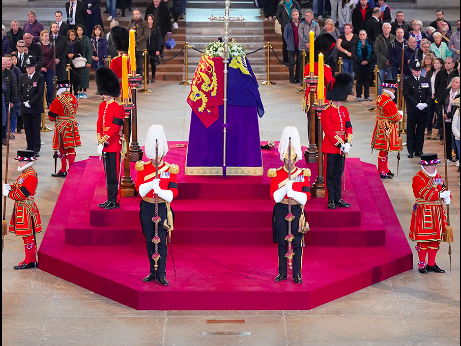 Photo:  The Queen and her Queue, 16 September 2022, Westminster Hall, Houses of Parliament

“Are my Jewish subjects happy”?  When the late Queen Elizabeth wanted to know about the history of Jews in Britain, she turned to the historian, Sir Martin Gilbert.

At an event at Buckingham Palace to celebrate the religions of the peoples of Britain, Sir Martin met the Queen.  He was told the Queen was going to be asking him a question, and he was told the question beforehand so he could prepare a proper answer.  When his turn came at the reception and the Queen was in front of him, she enquired about how the Jews had come to Britain.  In a few moments, Martin gave her a concise history of Jews in Britain.  Satisfied with the answer, she thought for a moment and then asked him:  “Are my Jewish subjects happy?”

When Martin told this story, he launched into a series of potential ways he could answer this.  But in his inimitable style, when he responded to the Queen, he assured her they were happy.

Since the Queen’s death a few short weeks ago, I have thought about Martin’s relationship with the Queen and the respect he held for her and for the monarchy, for the history and the tradition, for the dedication she showed her subjects and others around the world, for the dignity and devotion with which she carried on her duties amid difficulties in the world and in her own family, and her own advancing age.  What would Martin say now?  We can only look at what he wrote, in this excerpt from his History of the Twentieth Century on the death of the former monarch, her father:

Within Britain, the death of King George VI on February 6 created an upsurge of sorrow and emotion.  The King, who was only fifty-six years old at the time of his death, had not been a flamboyant or demonstrative personality.  He had come to represent the virtues of calm reliability, even of shyness.  Few photographs had made such an impact on the British public as that in which, with Queen Elizabeth, he was seen looking at the damage caused to Buckingham Palace after a German wartime air raid.  Following his death, ten days of national mourning  were declared.  At the Lying-in-State of the King in Westminster Hall, which took place over a period of three days, more than 300,000 people paid their respects, standing for many hours in rain, sleet and snow as the line moved slowly forward across the Thames bridges and along the Embankment.

The new sovereign, Queen Elizabeth II, was also proclaimed “Head of the Commonwealth”, the first time that this term was used.  The burdens about to be thrust upon her had been understood by her father, who had apparently spoken of her as a “poor lonely girl … and she will be lonely all her life.”

Whether she was indeed lonely in life, she certainly was not lonely in death as could be seen by the nearly million people who paid their respect to her during her Lying-in-State in Westminster Hall, and lined the streets as her coffin went past.  In terms of dignity, dedication, and devotion, the Queen set the standard, and the British people, world leaders and dignitaries learned from her example.

Twenty years ago Martin had told me about Operation London Bridge, the planning for the Queen’s funeral arrangements that was already in the works.  Planning is one thing, and it seems to have paid off in terms of the precision and pageantry, not to mention the security that allowed the new King, the Heir to the Throne, and the Queen’s family to walk among hundreds of thousands of people and not be in danger.  What is perhaps more surprising is the outpouring of love and devotion in an air of silence and solemnity shown by the British people, who have taught the world the meaning and example of “a queue” and the meaning and example of mourning a beloved monarch.  Queen Elizabeth II brought the country together, and the world together, in her life and in her death.

In her speech in Ireland at a State dinner in her honour at Dublin Castle in 2011, the Queen, in a visit that hoped to heal old wounds, spoke about “being able to bow to the past, but not be bound by it.”  She understood history.  She understood hope.

Read:  History of the Twentieth Century