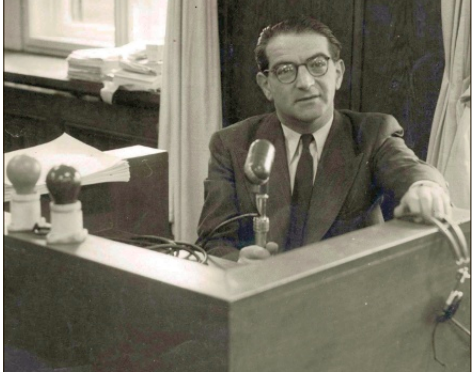 Photo: “Kasztner at the trial in Israel in 1953 in which a judge condemned him for selling his soul to the devil.”

Was Rudolf Kasztner a traitor to the Jewish people, who saved a few friends while allowing more than 400,000 Jews to be deported to Auschwitz, knowing their fate, but refusing to warn them? Films, plays, books and articles portray his actions in this way.

The truth is very different. Kasztner was not a villain, but a victim, who was cruelly deceived by the mastermind of mass murder, Adolf Eichmann.

The story is this.  On 7 April 1944 two Slovak Jews, Rudolf Vrba and Alfred Wetzler, escaped from Auschwitz, bringing out the news that the camp was a killing centre.  On April 25, the very day their report reached the Zionist leaders in the Slovak capital Bratislava, an intercepted copy also reached Eichmann, who was then in Budapest preparing the mass deportation of Hungarian Jews.

Eichmann realised that Kasztner – deputy chairman of the Hungarian Zionist Organisation – and his colleagues in Budapest, would learn the truth the moment Kasztner went to Bratislava, a journey he was planning to make within the next few days.  Realising that Kasztner and his officials would then alert the Jews of Hungary, Eichmann acted without delay, summoning to SS headquarters in Budapest one of Kasztner’s colleagues, Joel Brand, head of the Zionist Assistance and Rescue Committee.

As Brand revealed in his subsequent interrogation by the Allies and the Jewish Agency in Aleppo and Cairo, Eichmann masterminded the following deception with brilliance.

“I am prepared to sell you all the Jews,” Eichmann said.  “I am also prepared to have them annihilated. It is as you wish.”  He claimed he would save the Jews of Hungary – the only surviving large mass of Jews in Europe – in return for Brand going to Istanbul and negotiating with the British and Americans for a vast amount of supplies and money.  “Goods for blood” was the phrase Eichmann used.  The deportation of Hungary’s Jews would still take place, Eichmann said, “but there would be no killing until the answer was received.”  But Brand must “hurry as the Germans cannot keep women and children for an unlimited period as it costs money.”  In deportation, Eichmann assured Brand “the treatment would not be too harsh”.  But the Allies must agree to give the SS more than 5,000 lorries (“one lorry for 100 Jews,” Eichmann suggested), 40,000 kilos of coffee, 10,000 kilos of cocoa, 10,000 kilos of tea, two million bars of soap, and large amounts of foreign currency.

In 1960, when the deception was revealed by Brand at the Eichmann trial in Israel, Hannah Arendt commented:  “Eichmann’s cleverest trick in these difficult negotiations was to see to it that his men acted as though they were corrupt.”

Rudolf Vrba, who had risked his life to try to warn Hungarian Jews of their true fate, later called Eichmann’s deception “a clever ruse to neutralise the potential resistance of a million people”. Eichmann told Brand that while the negotiations with the Allies were taking place, the Jews of Hungary would be taken to a special holding camp, and housed and fed, to await the day that the “deal” was signed.  Then they would all be taken to the safety of neutral Spain or Portugal.  Not one of the deportees would be harmed.  But if the Allies rejected the deal, they would all be killed.

Kasztner and his colleagues had no option but to send Brand to negotiate.  Eichmann had made it clear that the whole Hungarian Jewish community could be saved.  When the deportations began on May 15, they were therefore confident that no harm would befall the deportees.  Their overriding concern was to get the Allies to agree to the deal as quickly as possible.  On May 24 Brand was driven from Budapest to Vienna and then sent by air to Istanbul.

Eichmann was in no hurry.  The longer the negotiations were drawn out, the more Hungarian Jews were reaching Auschwitz on a daily basis and being murdered there, at times 10,000 a day, while the Hungarian-Jewish leadership was convinced that they were unharmed, awaiting the signing of the deal and the safe transfer of all the deported Jews to a neutral land.  As proof that he could be trusted, Eichmann offered, while the negotiations were still continuing, to send a train with 1,684 Hungarian Jews to safety in Switzerland.  A few were Kasztner’s friends, most were not.  They left Budapest on June 30. Eichmann’s word, it seemed, was good as his bond.

It was only in the first week of July 1944 that details of the actual murder of Hungarian Jews at Auschwitz reached the West, brought by two further Jewish escapees, Czeslaw Mordowicz and Arnost Rosin.  Suddenly Eichmann’s deal was exposed as the grotesque deception it had always been.  So swift was the international outcry that the Hungarian Government forced Eichmann to halt the deportation from July 8.

Of the 437,000 Hungarian deportees, more than 350,000 had been killed.  There had been no holding camp and no exchange of Jews for goods and money.  Those Jews in Budapest – l20,000 in all – who were about to be deported to their deaths in the following two weeks, were saved by the international outcry.

Not a crime by Kasztner, but Eichmann’s cruel deception plan, had led to the death of the majority of Hungarian Jews.

Note:  Sir Martin sent the JC editor this note on the source:

“The Eichmann quotations are from the verbatim transcripts of Brand’s interrogation by the Allies and by the Jewish Agency in Aleppo (which he reached by train from Istanbul).”

(originally published, with photo in The Jewish Chronicle, 19 June 2009)

Read :  Auschwitz and the Allies