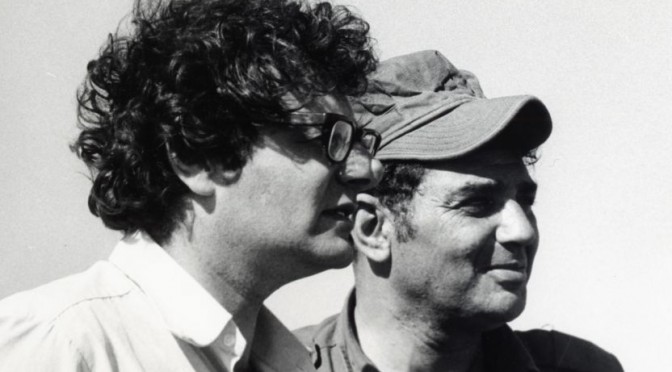 Extracts from Sir Martin’s unpublished diary
Coming to Israel on 4 October 1973 to research Churchill’s 1921 visit there, Sir Martin was caught up in the conflict as a volunteer, and keen to record history as it happened:
5.30 am.  Give a lift to an Englishman trying to get to Lod airport.  I take him half a mile towards the terminal.  I ask him to telephone a message for me when he reaches London.  He says:  “Put your name clearly.  I have a dozen such calls to make as soon as I get back.”  Since the war began, people here have felt very cut off from the outside world.  It has been almost impossible to get through to the International Telephone operator; the nearest one gets is a polite record in Hebrew, English, and French, to say that all lines are busy.  I cannot think what message to send, and scribble down:  “All well.  Am just off to the Golan.”  Hardly has the man got out of the car than I realize that this is about the least reassuring message one can send….
6.50 am.  Leave Tel Aviv.  I drive, the escort officer sits next to me.  The three journalists are in the back seat.  The officer is a captain, who in civilian life is a deputy director in one of the government ministries – quite a senior civil servant in fact.  But like everyone else in this war he has been mobilised and slotted into a job that needs to be done.  We drive north to Hadera, and then cut inland to the Jezreel Valley.  ….

7.50 am.  We drive past Megiddo – ancient Armageddon – along the road General Allenby took in the final expulsion of the Turks from Palestine.  ….

9 am.  Reach Ginossar, a small settlement on the Sea of Galilee.  In the guest house lobby all journalists are being briefed by an Israeli officer.  Two weeks ago, in civilian life, he was an accountant.  Now he is Major, recalled to service.  He gives me a word of warning.  “It is hell up there.  There is no need for you to commit suicide.  I will send you to a quiet part of the line, where there is no shelling.”  He shows me on the map where the line is. … We are about to leave.  The Major takes me aside and says:  “As you are not the latest kamikaze squad, drive first northward from Harfa.  Like Napoleon and Marlborough, from there you can look down on the whole battle front – the ugly, brown, great graveyard.  These are not the green fields of Waterloo.”  ….

10 am.  We reach Rosh Pina checkpoint, and turn northwards along the road to Kuneitra and Damascus.  The roadsign says thirty-five kilometres to Kuneitra.  The captain offers to drive, so that I can take my notes more easily without threatening to run the car into a ditch every time I put something down.  ….

10.15 am.  We cross the Daughters of Jacob bridge, into the Golan.  The Jordan is only a stream.  On either side of the road the heights are still mined with the Syrian mines of 1967.  The captain comments:  “For some reason or other we did not have time to clear the mines.”  We pass Syrian fortified positions, right on the old border, and looking straight into the eye of the agricultural settlements which they used to shell – the Huleh swamp, which Israel has drained, and turned into a paradise of fruits and vegetables.  Since 1967 they could at least go about their daily business without armour plating on their tractors, sleeping in underground shelters, and sending their children from home to school through deep fortified trenches, zigzagging though the settlements.  “The Six-Day War ended that terrible price for existence,” the captain says.  “At least since 1967, since we hold the Golan heights and pushed the Syria guns fifteen miles away, our children could walk upright along proper paths, and did not have to sleep underground.  That is why we regard the possession of the Golan heights as essential to preserve a civilian way of life.  If the Syrians had cared to turn their guns into tractors and the Golan heights into an agricultural paradise, there would simply have been no reason for us to take anything east of the Jordan river.”  ….

10.22 am.  We reach the point on the road reached by Syrian tanks at the outbreak of this war.  It is less than ten minutes slow winding drive from the Jordan river.  From this point the whole of the upper Jordan valley and the Huleh irrigation system is visible.  There is a building still intact among some trees.  It is the Syrian customs house of the 1923 border, a border agreed upon by Britain (which then controlled Palestine) and France (which then controlled Syria).  In 1947 it remained in Syrian hands.  In 1967 it was captured by the Israelis.  Now, but only briefly, it had become Syrian again.  “There is no doubt, however,” the captain comments, “that the Syrians did not even have time to get out of their tanks and brew themselves some coffee in it, before they were driven back.”  ….

10.39 am.  We pass another Syrian village, one which had virtually been destroyed in 1967.  At the roadside are several burnt out Israeli tanks, destroyed while defending this road on 6 October.  They are smashed and blackened.  I feel sick at the thought of what must have happened to the boys inside them when they were hit.  The captain says:  “It is hard to believe that this was a tank, this mass of steel; that it is also the instrument our safety turned upon.  But these are the few – the very few who stopped the Syrians from overwhelming the northern Galilee.”  ….

10.45 am.  We approach Kuneitra, a ghost town since 1967, its suburbs in ruins, large concrete bungalows seemingly squashed flat.  As we drive around the Kuneitra by-pass, we hear the staccato grumble of shell fire.  On the horizon, to the east, several tails of black smoke rise into the air.  We pass a Soviet-built tank, nothing now but twisted and broken metal.  Again I feel sick at the thought of the young Syrians who must have been inside it when for a few minutes it became an inferno.  Now it looks pathetic – several hundred pounds worth of totally useless wastage.  Looking around the blackened landscape, littered with pieces of metal ammunition boxes, shell cases, it is still not difficult to think of what the money spent on that single tank alone could do – or could have done – to bring greenery to this blasted waste land.  And to the left, and to the right, wherever the eye focuses, there are more tanks, some in ditches, some in fragments, some in small clusters, as if they had been hugging together for shelter, and some tilted grotesquely on their sides, as if some angry God had pushed them with his finger.  It is nothing but metal, twisted broken black metal.  This is the contribution of a great power to the poverty and striving of poor people.  ….
10.50 am.  The road turns sharply northeast through the cease fire fence into Syria and towards Damascus.  We stand by the fence looking at the semicircle of great plumes of white smoke, like miniature atomic clouds.  Every two or three seconds there is a sound like distant thunder.  Long low grumbles, like a muted lion, alternate with sharp bangs.  To the south a Syrian shell explodes only three miles away.  In a second or two there are four more explosions seeming to draw closer.  Three plumes of white smoke mingled with the black earth burst to the south east, only about a mile from where we stand.  The captain says:  “I hope they will not get any nearer.  I am going to get back into the car and to drive on along the Damascus road, away from the explosions.”  We drive on, the side of the road now littered with damaged Soviet tanks.  There are so many that even twenty minutes of looking at them have made them familiar, as if a destroyed tank were the most natural thing, and all the human tragedy and physical wastage which each one means seem an ancient fact of life.