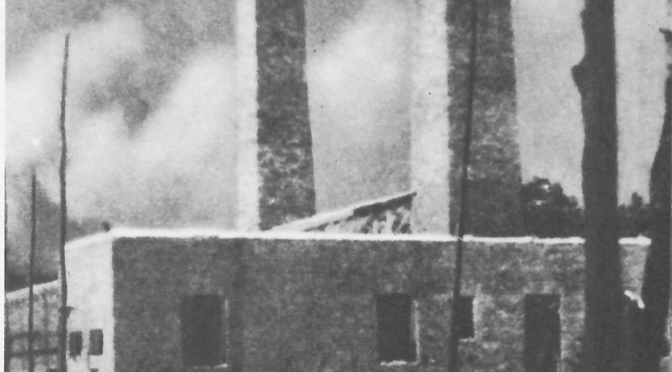 Photo: Crematorium IV at Birkenau, shortly before it was ready to be put into operation in the spring of 1943. Photo from Auschwitz and the Allies

At Birkenau the Jews of the Sonderkommando were preparing to revolt. It was an enterprise of supreme hazard, and of supreme courage. Those men who dragged to the crematorium the bodies of their fellow Jews who had been gassed and were then forced to scatter their ashes on the barracks paths, and in the nearby ponds, were themselves murdered in strict rotation. “I have wanted to live through it,” one of them, a Greek Jew working at Crematorium II, wrote shortly before the revolt, “to take a revenge for the death of my father, my mother, my beloved sister Nella.” More than three hundred Greek Jews were among the Sonderkommando preparing for revolt, among them Errera de Larissa, a former Lieutenant in the Greek army.

In the nearby Union explosives factory, a group of Jewish girls had collected small amounts of explosives and smuggled them to the plotters. Among the girls were Giza Weissblum and Raizl Kibel, both of whom survived the war. The preparations, Raizl Kibel later recalled, “were in connection with rumours that at the last moment, as the front approaches the camp, the SS may want to annihilate everybody by blowing up the camp.”

Three girls in the Union factory, Ella Gartner, and two girls known only by their first names, Toszka and Regina, managed to smuggle explosives into Birkenau. They handed them to a girl who was working inside Birkenau, Roza Robota, who passed them on to Wrobel, a member of the Sonderkommando. Two other Jewish prisoners were also privy to the plot, Israel Gutman and Jehuda Laufer.

Inside the Sonderkommando, Salmen Lewental coordinated the plans for revolt. His record, written at the time in a small notebook and then buried in a jar under the earth, is the principle source for the events of 7 October 1944.

The Birkenau camp records show that four days earlier, on October 3, the number of Jews in the Sonderkommando at Crematorium II was 169, divided into a day shift and a night shift. At Crematorium III there were also 169 Sonderkommando on October 3, likewise divided, and at Crematorium IV a total of 154, also in two shifts. With the gassing at Birkenau coming to an end, the Sonderkommando were alert to any indication that their days too might be numbered, they who in their gruesome task were given the privilege of ample food and blankets, and such “comforts” as they might need in their barracks.

On the morning of Saturday, October 7, the senior Sonderkommando man at Crematorium IV was ordered to draw up lists for “evacuation” of three hundred men at noon that same day. Fearing that this was a prelude to destruction, he refused to do so. The SS ordered a roll-call for noon. The purpose of the roll-call, the Jews were told, was that they were to be sent away by train to work in another camp. As the SS Staff Sergeant called out their numbers, however, only a few men answered.

After repeated calls and threats, Chaim Neuhof, a Jew from Sosnowice who had worked in the Sonderkommando since 1942, stepped forward. He approached the SS Staff Sergeant, talked to him, and gesticulated. When the SS man reached for his gun, Neuhof, loudly yelling the password “Hurrah”, struck the SS man on the head with his hammer. The SS man fell to the ground. The other prisoners then echoed Neuhof’s “Hurrah” and threw stones at the SS.

Some of the Sonderkommando at Crematorium IV attacked the SS so viciously with axes, picks and crowbars that several SS men fell wounded and bleeding to the ground. Other SS men sought cover behind the barbed-wire fence, shooting at the prisoners with their pistols.

Some of the prisoners then managed to run into their empty barracks, where there were hundreds of straw mattresses n the wooden bunks. They set the mattresses on fire. The fire spread at once to the wooden roof of Crematorium IV.

The arrival of SS reinforcements on motorcycles, from the SS barracks inside Birkenau, brought the revolt at Crematorium IV to an end. All those who had taken up weapons, and all who had set fire to the crematorium roof, were machine-gunned.

[Martin’s source footnote to the Greek member of the Sonderkommando who wanted revenge for the murder of his family: Manuscript, written in Greek, found in late autumn of 1980 in a thermos flask buried near Crematorium II, by Polish schoolchildren planting a tree: text sent to the author by the Auschwitz Museum.]

An excerpt from The Holocaust