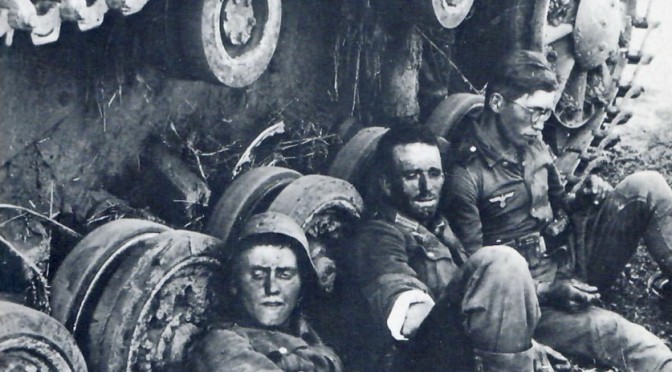 Photo: Summer 1941; battle-weary German troops rest at the side of the tank

On the night of July1, a train made up of twenty-two goods wagons and two passenger cars left Leningrad for the east; on board, under the vigilant eye of the art scholar Vladimir Levinson-Lessing, were some of the finest treasures of the Hermitage: Rembrandt’s Holy Family and the Return of the Prodigal, two Madonnas by Leonardo da Vinci and two by Raphael, as well as paintings by Titian, Giorgione, Rubens, Murillo, Van Dyck, Velasques and El Greco. Also on the train was a marble Venus acquired by Peter the Great, Rastrelli’s sculpture of Peter, the museum’s Pallas Athena, and its superb collection of diamonds, precious stones, crown jewels and ancient artefacts of gold.

Nearer to the front, at Mogilev, July 1 saw two Soviet Marshals, Voroshilov and Shaposhnikov, briefing those who were to stay behind as the Germans advanced, and set up partisan groups. “Blow up bridges,” they were told, “destroy single trucks with enemy officers and soldiers. Use any opportunity to slow up the movement of enemy reserves to the Front. Blow up enemy trains full of troops, equipment or weapons. Blow up his bases and dumps.”

On July 1, the Germans entered Riga. In Berlin, Ribbentrop urged the Japanese to enter the war at once, and to strike a the Soviet Union in the Far East. The Japanese refused to do so, the news of their refusal, and of their decision to push instead into French Indo-China, being radioed from Tokyo to Moscow by Richard Sorge on July 6. As a result of this Intelligence, Soviet troops from the Far East could continue to reinforce the armies battling in the West. Reinforcement were urgently needed; on July 2 the Romanian Army, having watched the German forces advancing for eleven days, had attacked in the south, striking in the direction of the Ukrainian city of Vinnitsa.

This new onslaught made even more urgent the evacuation of factories from southern Russia. On July 2 it was decided to move the armoured-plate mill at Mariupol to the Ural city of Magnitogorsk. On the following day, the State Defence Committee in Moscow ordered the transfer eastward of twenty-six further armaments factories from throughout western Russia, including Moscow, Leningrad and Tula. From Kiev and Kharkov too, individual plants and essential machinery were ordered eastward.

On July 3, Stalin broadcast, for the first time since the invasion twelve days before, to the Russian people. “A grave threat hangs over our country,” he warned, and he went on to tell his listeners: “Military tribunals will pass summary judgements on any who fail in our defence, whether through panic or treachery, regardless of their position or their rank.”

Stalin’s speech contained a powerful appeal, not to Communism but to patriotism. He addressed his listeners, in his opening words, not only as “comrades” and “citizens”, but also as “brothers and sisters” and “my friends”. In one passage, he appealed for the formation of partisan units behind the lines “to foment guerilla warfare everywhere, to blow up bridges and roads, damage telephone and telegraph lines, set fire to forests, stores, transports”. The enemy, “and all his accomplices,” must be “hounded and annihilated at every step”.

The Germans failed to appreciate the storm which such an injunction was to raise against them. “It is no exaggeration to say”, wrote General Halder in his diary on July 3, “that the campaign against Russian has been won in fourteen days.” Behind the lines, the cruelty was beginning to exceed all previous cruelty in this or any other war. On July 4, one of Himmler’s Special Task Forces recorded the murder of 463 Jews in Kovno; two days later a further 2,514 were killed. In Tarnopol, within forty-eight hours of the German occupation, six hundred Jews had been killed, and in Zborow a further six hundred. In Vilna, fifty-four Jews were shot on July 4 and a further ninety-three on the following day.

On July 5, the part played in these massacres by Lithuanians was raised at Hitler’s headquarters in East Prussia by a German Army officer. In Kovno, according to a report by the Special Task Forces, 2,500 Jews had been killed by the Lithuanians before the Germans had even occupied the city. German soldiers, Hitler’s adjutant Colonel Schmundt, replied, were not to interfere in these “political questions”; what was happening to the Jews was part of “a necessary mopping up operation”. Hitler himself was confident of victory; that day, to his private staff, he spoke of making the “beauties of the Crimea” accessible by autobahn from Germany: “for us Germans, that will be our Riviera”. Croatia too, he said, would be “a tourists’ paradise for us”. In Russia, it was enough “for the present” for the Urals to be the new Eastern frontier. “What matters,” Hitler explained, “is that Bolshevism must be exterminated. In case of necessity, we shall renew our advance wherever a new centre of resistance is formed.” Moscow, he added, “as the centre of the doctrine, must disappear from the earth’s surface, as soon as its riches have been brought to shelter”.

Those who were determined to prevent such an outcome to the war redoubled their efforts that July. From London, plans were made to send military and medical aid to the Soviet Union on a substantial scale, even diverting American aid – then on its way to Britain – from British to Soviet ports. In the air, the attacks on Germany continued, despite a considerable improvement in the German air defences. In a bombing raid on Bremen on July 4, five out of the twelve attacking aircraft had been shot down. For his bravery in persevering with the raid, and in bringing the survivors home, the leader of the raid, the Australian pilot Hughie Edwards, was awarded the Victoria Cross. More than a thousand miles to the south, on July 5, the Yugoslav Communist partisan, Tito, issued an appeal to his fellow Yugoslavs. “Now is the time,” he declared “the hour has struck to rise like one man in the battle against the invaders and hirelings”. On the following day, Tito sent a Montenegrin student, Milovan Djilas, to his native province, to organize resistance against the German occupation forces. Tito told Djilas: “Shoot anyone if he wavers or shows any lack of courage or discipline!”