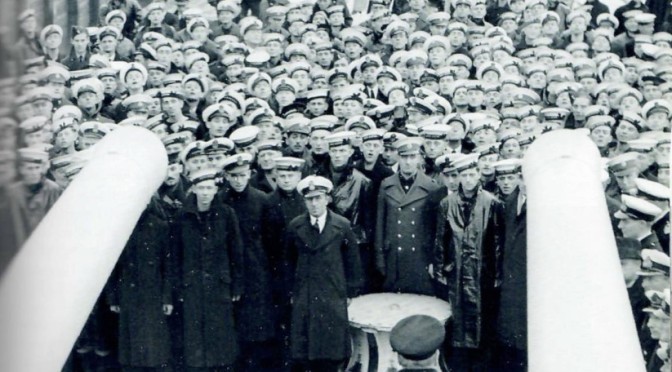 Photo: Churchill addressing the crew of the HMS Exeter

Notwithstanding the heroic efforts of the Royal Air Force in repelling the German air assault throughout the summer and autumn of 1940, the British public, after the fierce battering of the Blitz, remained deeply anxious lest Hitler, having subjugated Denmark and Norway, Belgium, Luxembourg, Holland and France to Nazi rule, would invade Britain in the spring of 1941. In a broadcast on 9 February 1941, Churchill spoke with confidence and conviction:

“You will have seen that Sir John Dill, our principal military adviser, the Chief of the Imperial General Staff, has warned us all that Hitler may be forced by the strategic, economic and political stresses in Europe, to try to invade these islands in the near future. That is a warning which no one should disregard.

“But I must drop one word of caution; for next to cowardice and treachery, over-confidence, leading to neglect or slothfulness, is the worst of martial crimes. Therefore, I drop one word of caution. A Nazi invasion of Great Britain last autumn would have been a more or less improvised affair. Hitler took it for granted that when France gave in we should five in; but we did not give in. and he had to think again. An invasion now will be supported by a much more carefully prepared tackle and equipment of landing-craft and other apparatus, all of which will have been planned and manufactured in the winter months. We must all be prepared to meet gas attacks, parachute attacks, and glider attacks, with constancy, forethought and practised skill.

“The other day, President Roosevelt gave his opponent in the late Presidential Election a letter of introduction to me, and in it he wrote out a verse, in his own handwriting from Longfellow, which he said ‘applies to you people as it does to us’. Here is the verse:

Humanity with all its fears,

With all the hopes of future years,

Is hanging breathless on they fate!

“What is the answer that I shall give, in your name, to this great man, the thrice-chosen head of a nation of a hundred and thirty millions? Here is the answer which I will give to President Roosevelt: Put your confidence in us. Give us your faith and your blessing, and, under Providence, all will be well.

“We shall not fail or falter; we shall not weaken or tire. Neither the sudden shock of battle, nor the long-drawn trials of vigilance and exertion, will wear us down. Give us the tools, and we will finish the job.”

Excerpt from Churchill, The Power of Words