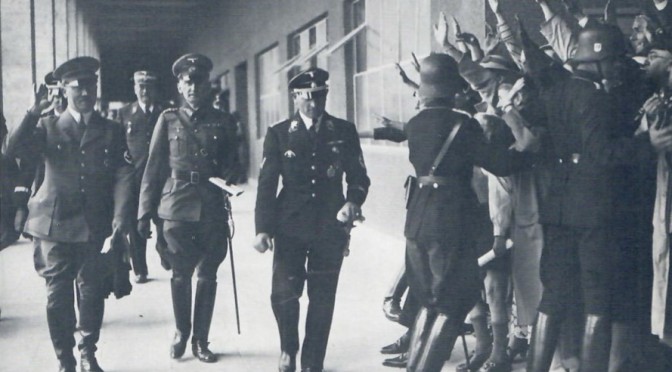 August 1932: … as part of the research for his Marlborough biography, Churchill left England for Germany, and for a visit to the battlefields of Blenheim. With him on this expedition went Clementine, Sarah, Randolph, Prof [Lindemann], and a leading military historian, Lieutenant-Colonel Packenham-Walsh.

After visiting Marlborough’s early battle triumphs, Ramilles and Oudenarde – in Belgium and Holland – the party drove on to Munich, before proceeding southwards to Blenheim. While they were in Munich, Randolph was keen to set up a meeting between his father and Hitler.

While reporting the election in July, Randolph had met, and enjoyed the company of one of Hitler’s friends, Ernst Hanfstaengel, a Harvard graduate., and a friend of the then Governor of New York State, Franklin Roosevelt. Randolph now asked “Putzi”, as Hanfstaengel was known, to use his influence to bring Churchill and Hitler together. Churchill dined with Hanfstaengel who spoke in a bewitched manner about Hitler and his policies. It soon emerged that almost every day Hitler visited the very hotel in which Churchill was staying. Hanfstaengel was therefore certain that a meeting could easily be arranged.

Although Churchill gave Hanfstaengel his permission to arrange the meeting, Hitler was not keen. He was indeed quite nervous of the prospect, dismissing Churchill, according to Hanfstaengel’s own account, as a “rabid Francophile”.

Despite Hitler’s unease, Hanfstaengel still hoped that the Nazi leader might decide to join Churchill’s party for coffee. At dinner, while Hanfstaengel chatted with Churchill and Clementine, Churchill pressed him about Hitler’s anti-Semitism. “I tried to give as mild account of the subject as I could,” Hanfstaengel recalled, “saying that the real problem was the influx of eastern European Jews and the excessive representation of their co-religionists in the professions.” To this Churchill listened carefully. Then he told Hanfstaengel: “Tell your boss from me that anti-Semitism may be a good starter, but it is a bad sticker.”

Hitler never appeared for coffee. Hanfstaengel made one more effort the next day to persuade him to meet Churchill. Refusing yet again, Hitler asked what could be achieved by meeting a man who was not a member of the Government and to whom no one listened. “People say the same thing of you,” Hanfstaengel replied. Alternating his routine, Hitler avoided the hotel during the remaining two days of the Churchill’s visit.

* 23 April 1933, in a speech Churchill gave to the Royal Society of St George which was broadcast over the BBC, he said: “If we lose faith in ourselves, in our capacity to guide and govern, if we lose our will to live, then indeed our story is told. … If, while on all sides foreign nations are every day asserting a more aggressive and militant nationalism by arms and trade, we remain paralysed by our own theoretical doctrines or plunged in the stupor of after-war exhaustion, then indeed all that the croakers predict will come true, and our ruin will be swift and final.”