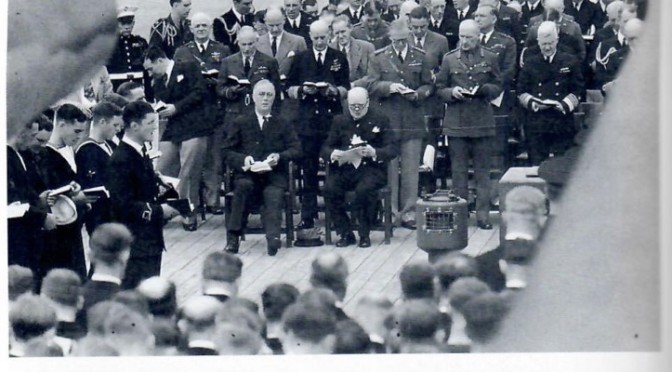 As part of the Franco-German Armistice, France had agreed to transfer its warships to German control. Part of that fleet was at Oran, in French North Africa. When Lothian asked Roosevelt if he would support Britain’s “forcible seizure” of the ships, Roosevelt replied, “certainly.” He would expect the French ships to be seized rather than “fall into German hands”.

Before taking action against the French warships at Oran, Churchill instructed the British admiral outside the port to open negotiations with his French counterpart. One offer was that the French ships sail to the United States for the duration of the war, their crews being repatriated to France if they wished. When negotiations failed, the British warships opened fire. It was one of the hardest, and harshest, of Churchill’s wartime decisions. More than 1,250 French sailors, Britain’s allies of two-and-a-half weeks earlier, were killed, and most of the ships disabled. Seven months later Roosevelt’s personal emissary to Churchill, Harry Hopkins, told a member of Churchill’s Private Office that it was Britain’s action at Oran that convinced Roosevelt, in spite of Ambassador Kennedy’s “defeatist opinions,” that Britain would continue to fight.

Encouraging news reached Churchill on July 25. An agreement had been signed in Washington whereby the United States would manufacture war materials for Britain according to a ratio of their respective needs of 19 to 14, putting British and American requirements almost on parity. This ratio meant that 14,375 aircraft would be manufactured for Britain during the coming twenty-one months. A similar agreement was being negotiations for arms and ammunition.

Pressed to do so by the Admiralty, Churchill asked Lord Lothian to reactivate the request for American destroyers. “Need of American destroyers is more urgent than ever,” he wrote, “in view of losses and the need of coping with invasion threat as well as keeping Atlantic approaches open and dealing with Italy.” And he went on to explain: “There is nothing that America can do at this moment that would be of greater help than to send fifty destroyers, except sending a hundred. The flying-boats are also of the greatest importance now in the next two months. As I have repeatedly explained, the difficulty is to bridge the gap until our new war-time production arrives in a flood.”

Churchill had been persuaded by Lord Halifax to hold back his previous telegram to Roosevelt about the destroyers. But according to Lothian, “This is the moment to press the President about destroyers.” Churchill did so, setting out the scale of British merchant shipping losses and warning the President: “We could not sustain the present rate of casualties for long, and if we cannot get a substantial reinforcement the whole fate of the war may be decided by this minor and easily remediable factor.”

Churchill continued: “Mr President, with great respect I must tell you that in the long history of the world this is a thing to do now. Large construction is coming to me in 1941, but the crisis will be reached long before 1941. I know you will do all in your power, but I feel entitled and bound to put the gravity and urgency of the position before you.” He was sure, Churchill ended, “that, with your comprehension of the sea affair, you will not let this crux of the battle go wrong for want of these destroyers.”