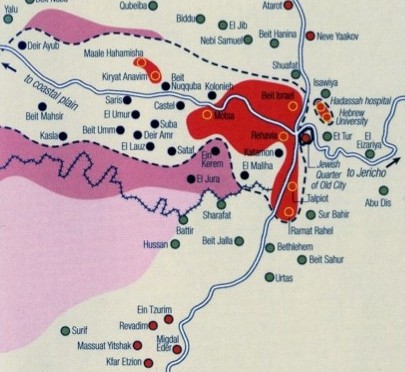 From the moment of Israel’s declaration of independence on 14 May 1948, Jerusalem – the capital city of the new nation – was besieged, as Arab forces, determined to crush the Jewish state at birth, cut off its main city from the remainder of the country.

The only link between Jerusalem and the rest of Israel was a narrow, winding road running down the Judean hills to the coast. This was cut by Arab soldiers. The “Jerusalem Corridor”, as it was called, became the scene of repeated attacks and counter-attacks.

Independence brought with it the creation, on 28 May, of a national army, navy and air force, the Israel Defence Forces (IDF). The Haganah, hitherto the defence arm of the pre-independence administration, became part of the national army. Important units were stationed inside Jerusalem. Their first full-scale battle was at the southern edge of the city, where Egyptian forces, having advanced 125 kilometres (80 miles) from the Sinai desert, overran the city’s single kibbutz, Ramat Rahel.

Twice the Israeli forces retook the kibbutz, and twice they were driven out, until the newly created Harel Brigade, which had been fighting in the Jerusalem corridor, pushed the Egyptians back. The trenches where they fought at Ramat Rahel are still visible today. The commander of the Harel Brigade was a future Prime Minister of Israel, Yitzhak Rabin. Many foreign volunteers fought under his command, including Jews from Britain, Canada and the United States.

At the Israeli General Staff Headquarters north of Tel Aviv a bitter dispute was raging. The Chief of the Staff, Yigael Yadin, insisted there were not enough Israeli troops or weapons to drive the Arab forces from the Jerusalem corridor and break the siege of Jerusalem. The Prime Minister, David Ben-Gurion, was emphatic that it be done, and designated the newly-created Seventh Brigade for the task.

Yadin pointed out that as many as a quarter of the members of the Seventh Brigade were survivors of the Holocaust who had just arrived from British internment camps in Cyprus. Many had never fired a rifle. Many spoke not a single word of Hebrew, the language of command. The brigade itself did not have a single field radio.

Ben-Gurion argued that the siege of Jerusalem had to be broken, and reasoned that the Seventh Brigade was the only fighting force not in action on the other war fronts, one of them a mere 12 kilometres (7.5 miles) from Tel Aviv.

The Seventh Brigade went into action on 25 May, attacking the Arab forces holding the southern entrance to the corridor at Latrun, a former British police fort. Among those wounded in the attack were Avigdor Arikha, a survivor of the Holocaust who was later to become one of Israel’s finest painters, and Ariel Scheinermann – the future Ariel Sharon. A second major attack five days later also failed and Latrun remained in Arab hands until 1967.

To by-pass the Latrun stranglehold on the road to Jerusalem, another road was built through the hills and forests. Known at the Burma Road, after the Second World War highway driven through the mountains from Burma to China, it eventually brought arms, troops and vital food and water to Jerusalem, ending the siege.

Excerpt from The Story of Israel  ©Martin Gilbert 2008