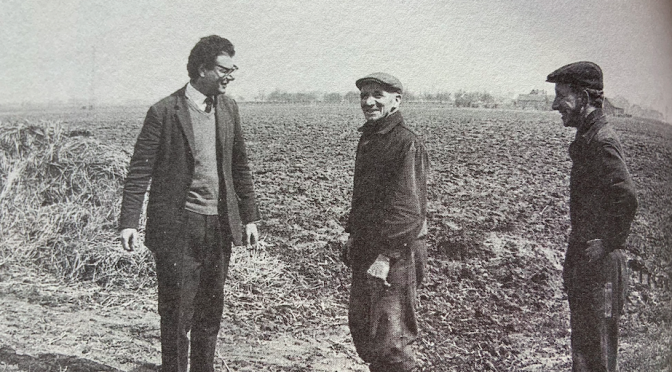 Photo: Martin with the owner of Burnt Out Farm, Joël Wgeux, and his son, Ploegsteert, 1970, where Churchill had made his frontline observation post in 1915.

From the Preface, In Search of Churchill, 25 November 1993

This book traces some of my travels and discoveries in search of Churchill since 1962. The process of finding out about any historical character can be a surprising one. All biographers who embark on the search find themselves caught up in many adventures and are continually amazed by the diverse ways in which they reach their goal of understanding. In this book I share some of my experiences in the hope that they may be of interest or amusement, and that something further will emerge from them of the character, struggles and achievements of Churchill himself.

Innumerable people play a part in the quest for a single character. Not a week has gone by since I began my work when I have not written to some individual or archive to seek help on a point of detail. Their responses have seldom failed me. Many people shared their knowledge with me, or helped to elucidate matters that had puzzled me.

Among the objects of my research were several aspects of Churchill’s supposed character that have become the focus of considerable speculation or dogma: among them his depressions, his drinking, his love of war, his not infrequent roughness to his staff and secretaries, and the lust for adventure that led to the Dardanelles. There were also topics that people expressed curiosity about, including his sources of secret information during the wilderness years in the 1930s, and his painting. In addition, there were relatively unknown aspects of his character that emerged as I worked: for instance his generosity, his love of nature, and his sense of fun.

My own journey began in 1962 when I became a research assistant to Churchill’s son Randolph, who had just embarked on his father’s biography. After Randolph’s death in 1968 I was asked to continue his work and was fortunate to be able to call, as he had done, on research help.

The story told in these pages is a personal journey, but it could not have been told without the unstinting help of those of Churchill’s contemporaries who, when I approached them, shared with me their recollections, letters, diaries and documents. Many of the stories that I recount derived from the goodwill of those who responded to a stranger to whom they were prepared to entrust their precious memories and materials, for the sake of portraying Winston Churchill. I have acknowledged their help in successive volumes of the biography.

There have been a number of times in the past twenty-five years when different individuals have claimed, in a published memoir or in private conversation, that it was they who had been closest to Churchill and had known him best, at some particular period. Sometimes these claims were widely publicized on the lecture circuit and on television. But as one former civil servant, who did indeed work closely with Churchill for nearly six years, wrote to me, ‘The memory of Winston is nobody’s monopoly!’ My own search not only bears out this view, but was much enriched by it.

Almost three decades have passed since Churchill’s death. During those years many dozens of individuals have engrossed me in hundreds of hours of talk and correspondence, to ensure that many details of his remarkable and versatile life were saved for posterity. Many gems have emerged, in archives and in conversation, during the course of my journey. This book is the story of some of that journey’s highlights.

Read: In Search of Churchill