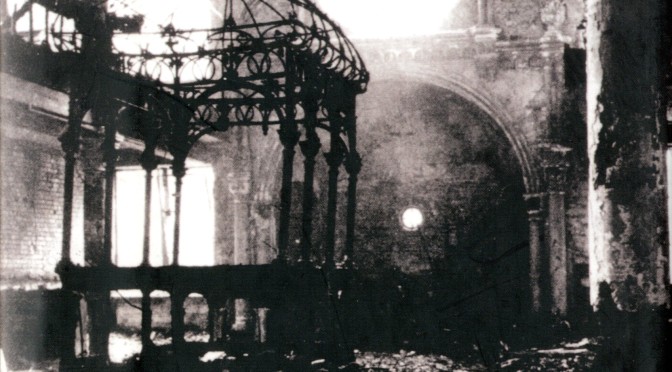 “Kristallnacht taught several lessons. It taught those who were the source of prejudice that a whole people can be demonised; that a whole nation can be turned totally and obscenely against a decent, hard-working, creative, loyal and integral part of its own society.  This point was made on 19 August 2005 when Pope Benedict XVI, on his first visit to his native Germany after becoming Pope, went to the Roonstrasse synagogue in Cologne, which had been destroyed on Kristallnacht and rebuilt after the war, and denounced the rise of anti-Semitism in the twenty-first century.”Kristallnacht taught those German Jews who still retained hope that Nazism would modify its anti-Jewish stance that the time had come to leave, except those who still clung, as some did, to the belief that the norms of civilised behaviour could not be totally breached or abandoned, and that, for example, war service for one’s country must be more meaningful than a stirred-up racial animosity.  …
“Kristallnacht taught several overseas governments that the time had come to open their gates to the growing tide of refugees.  Britain was among those countries that opened their gates widely, although still retaining, as did all countries except, for a while at least, the International Settlements of Shanghai, restrictions and barriers to unrestricted immigration.
“Kristallnacht taught the Nazi administrators and planners that they must in future act with silence and secrecy, hiding what they were doing to the Jews from the eyes of world indignation.  The less the outside world knew or saw, the more efficient would be whatever policy they chose, and the less liable to outside concern or interference.”Kristallnacht taught, in hindsight, a historical lesson, that what begins as something finite in destruction and limited in time can quickly develop into a monster of mass murder; that evil has gradations, but is also a process, and can move smoothly, effortlessly forward to greater evil.”    Read more Kristallnacht, Prelude to Destruction