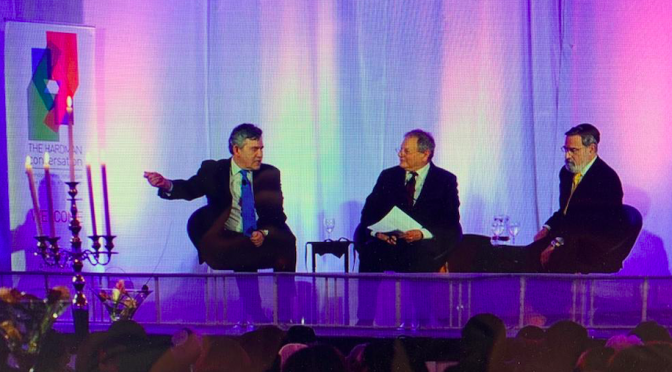 On 15 June 2011, at Hendon Synagogue, Sir Martin moderated a conversation between The Rt Hon Gordon Brown MP and the Chief Rabbi of Britain and the Commonwealth at the time, the late Lord Jonathan Sacks. These are Martin’s questions posed to the political and spiritual leaders:

1. Gordon, as we try to learn the lessons of leadership, what was your worst crisis, and what part did faith – the Judaeo-Christian ethic – have in your dealing with it, in your decisions?

2. Chief Rabbi, as a widely respected leader with much experience, as  you approach your double-decade as our Chief, can you tell us how important you feel it is, in our public life and discourse, at a time of crisis (or indeed in normal times, if there are any), to assert the primacy of ethical and moral standards? How does one do so?

3. For a leader to have influence, there has to be an over-arching sense of purpose, a coherent vision. In the words of Proverbs: “Where there is no vision, the people perish.”

May I ask you, Gordon, what part does “vision” have in the ability to lead – that is, to bring people along? And how does vision translate into the practical work of a leader?

Chief Rabbi, where do you feel “vision” stands in the lessons of leadership as you have seen and explored them?

4. Gordon, you have written on the Holocaust, you have been a prime mover in the school journeys to Auschwitz, and you have made a personal visit to Auschwitz with Sarah (about which she has written most movingly in her memoirs).

Chief Rabbi, when you speak about the Holocaust, you do so in a most powerful way.

What do each of you feel are the positive messages that can be taken away from our understanding and study of the Holocaust?

5. Demonisation against different beliefs or views is prevalent in our, and in many, communities: demonisation and division.

6. There is a delicate balance in all leadership questions: not merely a clear differentiation between right and wrong, but also a practical balance between the attainable and the unattainable. A leader has to be both a visionary – and a pragmatist, understanding the dynamics and aspirations of society, and conscious at all times of avoiding promises that cannot be fulfilled. Politics is said to be the art of making the desirable possible. What are your thoughts on this?

7. J. K. Galbraith, writing about the Great Depression in the 1930s and the war that followed, wrote: “All of the great leaders have had one characteristic in common: it was the willingness to confront unequivocally the major anxiety of their people in their time.” “This and not much else,” Galbraith added, “is the essence of leadership.”

What do each of you see as the major anxieties of our time, and how can they be confronted?

9. In the words of Walter Lippman: “The final test of a leader is that he leaves behind him, in other men, the conviction and the will to carry one.” How do you see the younger generation carrying on the torch that you carried forward so far – your legacy, as it were?

Although the answers were not recorded, the questions posed are as important today as they were ten years ago.

The late Rabbi Sacks wrote of one necessity for leaders:

“Though few of us are destined to be Kings, Presidents or Prime Ministers, there is a general principle at stake. Leaders learn. They read. They study. They take time to familiarise themselves with the world of ideas. Only thus do they gain the perspective to be able to see further and clearer than others. To be a Jewish leader means spending time to study both Torah and [wisdom] chochmah: chochmah to understand the world as it is, Torah to understand the world as it ought to be.”

Read More: Churchill and the Jews