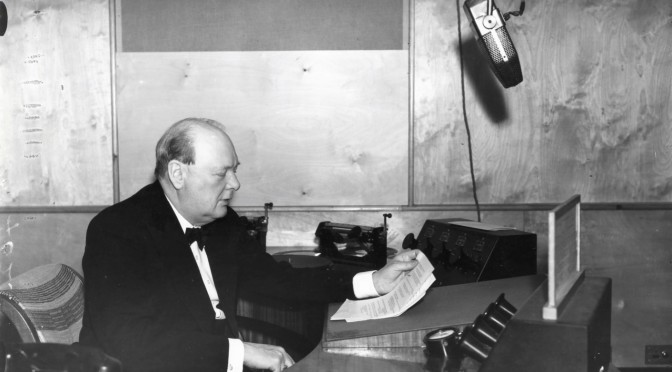 Throughout his long life, Winston Churchill understood the power of words. In public speeches, in published books, in newspaper and magazine articles, he expressed his feelings and laid out his vision for the future. His descriptions of the wars that he fought in between 1897 and 1900 were read with fascination by those who recognised his vivid narrative style and thoughtful reflections. While still in his twenties, he was a much sought-after speaker in both Britain and the United States.

Churchill used words, and used them to good effect, for different purposes: to argue for moral and political causes, to advocate courses of action in the social, national and international sphere, and to tell the story of his own life and that of Britain and its place in the world.

On 7 December 1941, Japan attacked the United States naval base at Pearl Harbor, and moved with its naval and air forces against American possession in the Pacific Ocean (Guam, Midway, Wake Island and the Philippines). Japanese forces also attacked British possessions in South East Asia (Hong Kong and Malaya) and against the Netherlands East Indies. Looking back at this fateful moment in the Second World War, Churchill wrote in his war memoirs:

No American will think it wrong of me if I proclaim that to have the United States at our side was to me the greatest joy. I could not foretell the course of events. I do not pretend to have measured accurately the martial might of Japan, but now at this very moment I knew the United States was in the war, up to the neck and in to the death. So we had won after all! Yes, after Dunkirk, after the fall of France; after the horrible episode of Oran; after the threat of invasion, when, apart from the Air and the Navy, we were an almost unarmed people; after the deadly struggle of the U-boat war – the first Battle of the Atlantic, gained by a hand’s-breadth; after seventeen months of lonely fighting and nineteen months of my responsibility in dire stress.

We had won the war. England would live; Britain would live; the Commonwealth of Nations and the Empire would live. How long the war would last or in what fashion it would end no man could tell, nor did I at this moment care. Once again in our long Island history we should emerge, however mauled or mutilated, safe and victorious. We should not be wiped out. Our history would not come to an end. We might not even have to die as individuals.

Hitler’s fate was sealed. Mussolini’s fate was sealed. As for the Japanese, they would be ground to powder. All the rest was merely the proper application of overwhelming force. The British Empire, the Soviet Union, and now the United States, bound together with every scrap of their life and strength, were, according to my lights, twice or even thrice the force of their antagonists. No doubt it would take a long time. I expected terrible forfeits in the East; but all this would be merely a passing phase. United we could subdue everybody else in the world. Many disasters, immeasurable cost and tribulation lay ahead, but there was no more doubt about the end.

Silly people, and there were many, not only in enemy countries, might discount the force of the United States. Some said they were soft, others that they would never be united. They would fool around at a distance. They would never come to grips. They would never stand bloodletting. Their democracy and system of recurrent elections would paralyse their war effort. They would be just a vague blur on the horizon to friend or foe. Now we should see the weakness of this numerous but remote, wealthy, and talkative people.

But I had studied the American Civil War, fought out to the last desperate inch. American blood flowed in my veins. I thought of a remark which Edward Grey had made to me more than thirty years before – that the United States is like “a gigantic boiler. Once the fire is lighted under it there is no limit to the power it can generate”. Being saturated and satiated with emotion and sensation, I went to bed and slept the sleep of the saved and thankful.

On 15 February 1942, General Percival, commanding the British and Dominion troops in Singapore, surrendered unconditionally to the Japanese. This devastating blow for Britain took place only four days after three German battle cruisers, Scharnhorst, Gneisenau and Prinz Eugen, had managed to sail in daylight from the Atlantic coast port of Brest through the English Channel to their German home ports in daylight. There was considerable public unease in Britain at this turn of events. On the night of the fall of Singapore, Churchill broadcast to the British people, and to the world, giving a comprehensive survey of the war thus far, culminating in the fall of Singapore:

Compared with those days of 1940, when all the world except ourselves thought we were down and out for ever, the situation the President and I surveyed in August 1941 was an enormous improvement. Still, when you looked at it bluntly and squarely – with the United States neutral and fiercely divided, with the Russian armies falling back with grievous losses, with the German military power triumphant and unscathed, with the Japanese menace assuming an uglier shape each day – it certainly seemed a very bleak and anxious scene.

How do matters stand now? Taking it all in all, are our chances of survival better or are they worse than in August 1941? How is it with the British Empire or Commonwealth of Nations? Are we up or down? What has happened to the principles of freedom and decent civilsation for which we are fighting? Are they making headway or are they in greater peril?

Let us take the rough with the smooth, let us put the good and bad side by side, and let us try to see exactly where we are. The first and greatest of events is that the United States is now unitedly and whole-heartedly in the war with us. The other day, I crossed the Atlantic again to see President Roosevelt. This time we met not only as friends, but as comrades standing side by side and shoulder to shoulder in a battle for dear life and dearer honour in the common cause and against a common foe.

We must not underrate the power and malice of our latest foe, but neither must we undervalue the gigantic, overwhelming forces which now stand in the line with us in this world-struggle for freedom, and which, once they have developed their full natural inherent power, whatever has happened in the meanwhile, will be found fully capable of squaring all accounts and setting all things right for a good long time to come.

You know I have never prophesied to you or promised smooth and easy things, and now all I have to offer is hard adverse war for many months ahead. 1 must warn you, as 1 warned the House of Commons before they gave me their generous vote of confidence a fortnight ago, that many misfortunes, severe torturing losses, remorseless and gnawing anxieties lie before us. To our British folk these may seem even harder to bear when they are at a great distance than when the savage Hun was shattering our cities and we all felt in the midst of the battle ourselves. But the same qualities which brought us through the awful jeopardy of the summer of 1940 and its long autumn and winter bombardment from the air, will bring us through this other new ordeal, though it may be more costly and will certainly be longer.

One fault, one crime, and one crime only, can rob the United Nations and the British people, upon whose constancy this grand alliance came into being, of the victory upon which their lives and honour depend. A weakening in our purpose and therefore in our unity – that is the mortal crime. Whoever is guilty of that crime, or of bringing it about in others, of him let it be said that it were better for him that a millstone were hanged about his neck and he were cast into the sea.

In the English-speaking world we rejoice in free institutions. We have free parliaments and a free press. This is the way of life we have been used to. This is the way of life we are fighting to defend. But it is the duty of all who take part in those free institutions to make sure, as the House of Commons and the House of Lords have done, and will I doubt not do, that the National Executive Government in time of war have a solid foundation on which to stand and on which to act; that the misfortunes and mistakes of war are not exploited against them; that while they are kept up to the mark by helpful and judicious criticism or advice, they are not deprived of the persisting power to run through a period of bad times and many cruel vexations and come out on the other side and get to the top of the hill.

Tonight I speak to you at home; I speak to you in Australia and New Zealand, for whose safety we will strain every nerve; to our loyal friends in India and Burma: to our gallant Allies, the Dutch and Chinese; and to our kith and kin in the United States.  1 speak to you all under the shadow of a heavy and far-reaching military defeat. It is a British and Imperial defeat.

Singapore has fallen. All the Malay Peninsula has been overrun. Other dangers gather about us out there, and none of the dangers which we have hitherto successfully withstood at home and in the East are in any way diminished. This, therefore, is one of those moments when the British race and nation can show their quality and their genius. This is one of those moments when it can draw from the heart of misfortune the vital impulses of victory. Here is the moment to display that calm and poise combined with grim determination which not so long ago brought us out of the very jaws of death. Here is another occasion to show as so often in our long story that we can meet reverses with dignity and with renewed accessions of strength. We must remember that we are no longer alone.

We are in the midst of a great company. Three-quarters of the human race are now moving with us. The whole future of mankind may depend upon our action and upon our conduct. So far we have not failed.   We shall not fail now. Let us move forward steadfastly together into the  storm and through the storm.

Excerpts from Churchill, The Power of Words