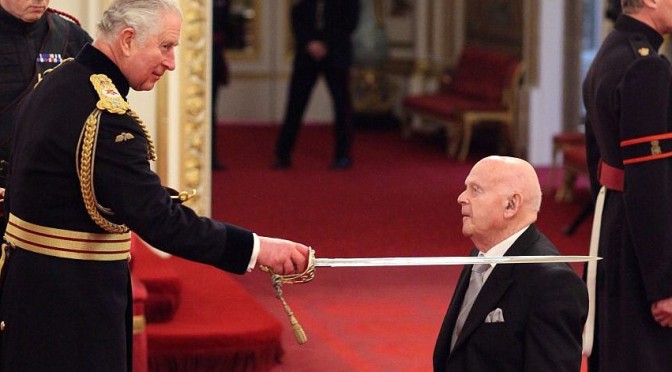 Fifteen-year-old Ben Helfgott from Piotrkow, who had also been brought from Schlieben, later recalled: “Two weeks after reaching the camp I learned that my father had been killed only a few days before, trying to run away from a death transport that was on its way to Theresienstadt by foot. He, and those who tried to run away with him, had been killed by Defenders of the Fatherland, as they were called – Germans in their fifties and sixties who had been called up in the last year of the war. Somebody from my father’s march, when he reached Theresienstadt, heard the name Helfgott mentioned, and I was called for. I walked in and the man said to me: ‘You’re a young boy, and I can’t hide from you what I know. Your father and a few other people ran away and they were shot. I didn’t see it personally. We heard the shots. It may be that he could be alive.’

“But for some unknown reason I felt that he had not survived. I was very low at that time. Up to then I was in great spirits. In the three weeks I was in Theresienstadt we didn’t go out to work. Although we didn’t get enough food, we could regain our strength, as we could make up our lost sleep. We could sleep to our heart’s content. My father’s death was the biggest blow that ever hit me. I had been with him up to December 1944, when we were separated in Buchenwald. As long as I live I’ll never forget that meeting with the man who told me. He was from Warsaw. I’ve never been so devastated in my life as when I heard that my father had been killed. The war was almost over. Yet in the last minute, his free spirit, his courage, cost him his life. Had he not tried to escape, had he just marched obediently like the rest of the group, we would have been reunited in Theresienstadt. When my mother and my little sister Lusia were killed two and a half years earlier, I was with my father and my sister Mala. I was shattered, but we were able to comfort each other. When I heard the circumstances of my father’s death, I was alone.

“I did all my crying then. The boys came up to me and tried to console me. I just cried and cried and cried. It went on for twenty-four hours. I was devastated. My father was thirty-eight years old. What a zest for life he had. You could never hold him back. He was never afraid. I had always such great confidence in my father, he was such an enterprising and energetic man, a provider. He could always get out of dangerous situations. I had great faith and belief in him. He was fearless and resourceful. Immediately after our delousing at Buchenwald, he had disappeared, only to reappear with two loaves of bread.

“Most of us survived because of luck, like those who have been shipwrecked in a storm. For most, it was likely that a wave would wash them off the rack. My father never floated off. In spite of the unusual amount of risks that he had taken for more than five and a half years, he somehow didn’t allow himself to be washed off the raft. He was lucky. Then, when freedom was so close, his luck ran out.”

An excerpt from The Boys, Triumph Over Adversity ©Martin Gilbert