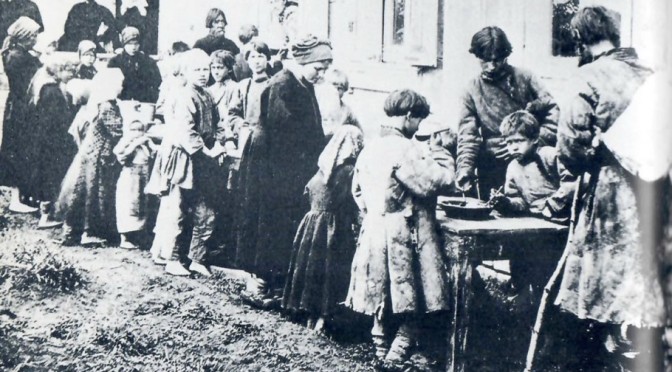 In Bavaria, Hitler was building up a small National Socialist (Nazi) Workers’ Party. Denunciation of the Versailles Treaty was a main theme of all his speeches. It was not so much the terms of the Treaty that he had rejected as the implication that Germany had been defeated. At the end of 1920 he had been able to find financial backers willing to purchase the Völkischer Beobachter, which became the Nazi Party’s newspaper. Large crowds gathered to hear him speak. In Munich, in February 1921, six and a half thousand people (five hundred more than his party membership at that time) gathered in a circus tent to hear him denounce the Allied demand for reparations. When a group within the party began talks, in his absence, to join the German Socialist Party, and proposed moving their headquarters from Munich to Berlin, Hitler resigned. He was urged to return by those who recognized his exceptional powers. He agreed to return on condition that he was made party chairman “with dictatorial powers”. Henceforth he was not only leader of the party, but the embodiment of the leadership principle, enshrined in his title (Führer, leader), and in the party salute (Heil Hitler!)

During 1921 Hitler worked to perfect the symbols which his party would use. He took meticulous care in choosing, from various designs that he found in a Munich library, the form of an eagle which would be used on the party notepaper. He adopted the ancient Aryan swastika symbol, and he designed uniforms and party emblems which members were ordered to wear at all times. On September 17 he sent out his first circular letter to party members in his new position as party chairman. In it he gave details of the party’s symbols and how they were to be used.

Hitler’s oratorical skills, and his fierce denunciation of those whom he characterized as “enemies” of Germany – the signatories of the Versailles Treaty, the German Republic, the Jews – were combined with formidable organizational powers. As the party membership grew, he divided Germany up into districts (Gaue), each one under the authority of a Gauleiter (Gau leader). He also created, in 1921, a paramilitary arm, the SA; originally, in order to get round the Versailles Treaty ban on paramilitary groups, the initials stood for Sportabteilung (Sports Division). Later the same initials were taken to stand for a more sinister title, Sturmabteilung (Stormtroops).

From the uniform that the Stormtroops wore, they were also known as the Brownshirts. Their initial purpose was to beat off rival groups. They first proved their value in this regard on November 4, when Socialist Workers’ Party members attacked a Nazi Party meeting, determined to break it up. Hitler was halfway through his speech when the workers attacked. There were fifty Brownshirts in the hall, and the attackers were beaten off.

The Brownshirts, Hitler explained in the first issue of their own newspaper, the SA Gazette, were not only an instrument for the protection of the Nazi movement, but were “primarily the training school for the coming struggle for freedom on the domestic front”.

In Russia, the Bolsheviks were confronted in 1921 by an insurrection in Siberia by peasants who were refusing to hand over their grain and livestock. As many as 60,000 peasants took up arms, cutting several stretches of the Trans-Siberian railway and occupying two large towns. It took several months, and many executions, before the authority of the central government was restored.

By early spring, Lenin had to face the fact that, after more than three years, Communism had failed to feed the Russian people, and that the economic methods he and his Party imposed led to bankruptcy and widespread starvation.

As famine spread, appeals were made to the United States for immediate help, and an American Relief Administration was established, which appealed to the American public for help. This was forthcoming, and substantial supplies were despatched. An International Conference of all Red Cross societies agreed that two men – the League of Nations Commissioner for Refugees, Dr Fridtjof Nansen, the Norwegian scientist and explorer, and the former American President, Herbert Hoover – should exercise “supreme control” of relief work in Russia. “The conditions are even worse than I expected,” Nansen – who was to be awarded the Nobel Peace Prize for his work in Russia – telegraphed to a British newspaper on December 19: “Words cannot possibly describe the misery and horrors I have seen. People are dying in their houses and in the village streets in the pitiless cold of a Russian winter without food or fuel to feel them. Millions must unavoidably die.”

Despite the famine and the New Economic Policy, Lenin had reason to be confident with the control exercised by his regime. A secret police system was in operation, and thousands of politicians and citizens who spoke openly against the regime were in prison. Even at the height of the New Economic Policy, sixty-one people were executed in Petrograd for “conspiracy against the Soviet Government”: one was the well-known poet Gumilev.

Inside the Soviet Union, the continuing forcible collectivization of agriculture had led to acute peasant hardship, mass deportation, and a collapse of rural productivity. At the meeting of the Communist Party Central Committee in October, sharp criticisms of the collective farm system were put forward, and an agitation to give up collectivization was began. Not only did collectivization continue, however, but those who fell below the targets set by Moscow were put on trial, accused of sabotage and shot. Yet the peasants could not produce the amounts demanded of them, however hard they tried: the total amount of grain deliveries demanded from them in 1932 exceeded the total crop. The delivery of whatever grain had been harvested was so ruthlessly enforced that starvation became widespread. That winter several millions of Russians died of starvation.

In the previous famine after the Bolsheviks came to power, appeals had been launched by the Soviet regime for help from the capitalist world, which had responded with massive aid, supervised by the League of Nations and the Red Cross. For this second famine which was on a much larger scale, no such appeal was made. Rumours of hunger were denied. When, at a closed and secret meeting in Moscow, the Secretary of the Kharkov Provincial Committee spoke of the scale and horror of the famine, Stalin intervened personally to belittle him. “We have been told that you, Comrade Terehkov, are a good speaker,” Stalin said. “It seems that you are a good storyteller, you’ve made up such a fable about famine, thinking to frighten us, but it won’t work. Wouldn’t it be better for you to leave your post of provincial committee secretary and the Ukraine Central Committee, and join the Writers’ Union? Then you can write your fables and fools will read them.”

“You live in interesting times,” Paul Valéry told a graduating class in Paris on 13 July 1932. “Interesting times are always enigmatic times that promise no rest, no prosperity or continuity or security,” and he added: “Never has humanity joined so much power and so much disarray, so much anxiety and so many playthings, so much knowledge and so much uncertainty.”

Read : History of the Twentieth Century, The Concise Edition