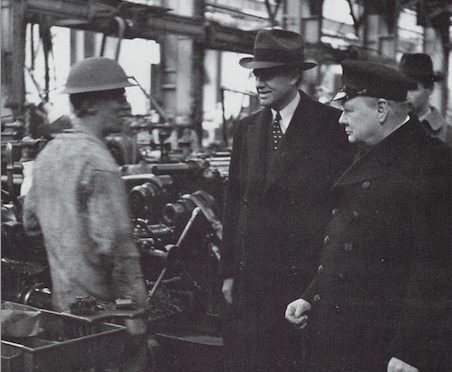 Photo:  “Averell Harriman with Churchill at a naval dockyard establishment in Plymouth, 2 May 1941, shortly after a severe German air raid (hence the steel helmet worn by the dockyard worker).”

“These two gentleman were apparently longing for Germany to commit some overt act that would relieve the President of his election and pre-election declaration regarding keeping out of the war.”

The Lend-Lease Bill was making its way through Congress, a slow process.  As it did so, Roosevelt followed the Hopkins mission with two appointments intended to bridge the gulf of distance and misunderstanding.  The first was a new American Ambassador, John G. Winant – known as “Gil” – who was immediately struck by Churchill’s “appreciation of the defence needs of the United States.”  Winant was to become a regular attendee at Chequers.  “He was the quiet man sitting in the corner taking it all in,” Churchill’s daughter Mary later recalled..

The second American appointment, suggested by Hopkins, was that of a forty-nine-year-old banker and businessman, Averell Harriman, to whom Roosevelt wrote in the third week of February:  “I want you to go over to London and recommend everything we can do, short of war, to keep the British Isles afloat.”

With the arrival in Britain of Winant and Harriman, hardly a day passed without these two Americans ensuring that Britain’s needs were understood in Washington, and acted upon.  Those needs were many.  As the German submarine sinking of merchant ships in the Atlantic wreaked havoc on Britain’s food and war supplies lifeline, Churchill telegraphed to Lord Halifax, who had become Ambassador in Washington after Lord Lothian’s death three months earlier:  “We cannot get through 1942 without several million tons of United States’ new construction of merchant ships.”

On the night of March 7, Hopkins telephoned Chequers to say that the Lend-Lease Bill had passed the Senate by 60 votes to 31.  “Thank God for your news,” Churchill telegraphed in reply.  To Roosevelt, who gave his formal assent to the Bill two days later, Churchill telegraphed on March 9:  “Our blessings from the whole British Empire go out to you and the American nation for this very present help in time of trouble.”

Lend-Lease made enormous purchases possible.  The first appropriation, for British orders placed up to the end of August 1941, enabled Britain to draw $4,736 million.  When, however, the Americans raised questions about the eventual repayment of the Lend-Lease money, Churchill wanted Britain to take a strong stance.  This was no time, he telegraphed to Halifax, “for us to be driven from pillar to post,” and he was angered by the American attitude, telling the Ambassador:  “Remember that although they may not all realise it their lives are now in this business too.  We cannot always be playing up to minor political exigencies of Congress politics.”  The American Secretary of the Treasury might be having “a bad time” before a congressional committee, “but Liverpool and Glasgow are having a bad time now.”  German bombers were at that very moment attacking docks, factories and railway marshaling yards on Liverpool’s Merseyside and Glasgow’s the Clyde.  That month 4,259 British civilians were killed in German air raids.

Churchill took Winant and Harriman with him to visit the bombed cities and repeatedly invited them to Chequers for weekend discussions.  The fruits of these discussions were quickly apparent.  As Churchill told the War Cabinet on March 20:  “These two gentleman were apparently longing for Germany to commit some overt act that would relieve the President of his election and pre-election declaration regarding keeping out of the war.”  Churchill added that Averell Harriman “had said that the United States might be prepared to escort their own ships outside the prohibited area.  He was working out a scheme whereby the United States ships would take over the long hauls, leaving us with the short hauls.  They were also planning a very big merchant ship-building programme, which would mature in 1942.”

Churchill did not hide from Winant or Harriman the extent of Britain’s weakness.  In a speech on March 18, formally welcoming Winant to Britain, he described Britain’s shipping losses as “this potentially mortal challenge.”  It would be met, however, by a naval and air strength that was growing “every week,” and with that strength came the “words and acts” of the President and people of the United States, “like a draught of life, and they tell us by an ocean-borne trumpet call that we are no longer alone.”

An excerpt from Churchill and America