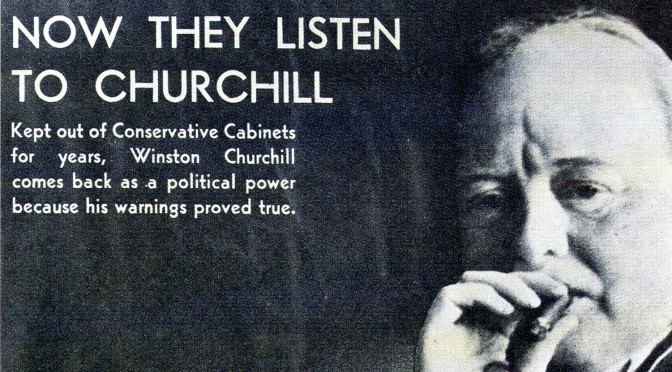 Photo: Churchill at Chartwell, taken on 25 February 1939 and published in the New York Times magazine on 13 August 1939.

“Somebody has to state the truth”

One of Churchill’s main fears during the 1930s was that the British Government was not putting sufficient resources into anti-aircraft defence. … On 26 September 1935, he spoke at the City Carlton Club in London:

“No doubt it is not popular to say these things, but I am accustomed to abuse and I expect to have a great deal more of it before I have finished. Somebody has to state the truth. There ought to be a few members of the House of Commons who are in sufficiently independent position to confront both Ministers and electors with unpalatable truths. We do not wish our ancient freedom and the decent tolerant civilisation we have preserved in this island to hang upon a rotten thread.”

“Decided only to be undecided”

“The First Lord of the Admiralty in his speech the other night […] said, ‘We are always reviewing the position.’ Everything, he assured us, is fluid. I am sure that that is true. Anyone can see what the position is. The Government simply cannot make up their minds, or they cannot get the Prime Minister to make up his mind. So they go on in strange paradox, decided only to be undecided, resolved to be irresolute, adamant for drift, solid for fluidity, all-powerful to be impotent.

“So we go on preparing more months and years – precious, perhaps vital to the greatness of Britain – for the locusts to eat. They will say to me, ‘A Minister of Supply is not necessary, for all is going well.’ I deny it. ‘The position is satisfactory.’ It is not true. ‘All is proceeding according to plan.’ We know what that means.”

Extracts from Churchill, The Power of Words ©Martin Gilbert