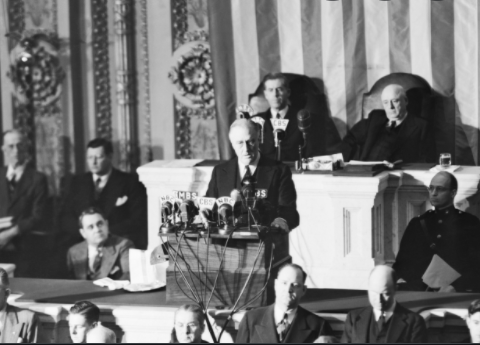 Photo: President Roosevelt addressing Congress to ask that a state of war be declared between the United States and Japan, 8 December 1941.

On the morning of December 6 – the day on which Hitler was forced to accept that Moscow was not about to fall – a secret committee met in Washington, charged with ascertaining, within the next three to six months, whether the United States would be able to produce an atom bomb.  That day, also in Washington, a member of the United States Navy’s Cryptographic Department, Dorothy Edgers, translated an intercepted secret Japanese diplomatic message that had been sent four days earlier from Tokyo to the Japanese Consul-General in Hawaii.  The message asked the Consul-General to send regular reports on all shipping movements, berthing positions and torpedo-netting at Pearl Harbor.  Alarmed by what she read, Dorothy Edgers translated three more messages that had been decrypted.  All contained similar questions.  That afternoon she took her translations to the head of the Translation Department.  He read them, made a few minor criticisms of her translations and told her:  “We’ll get back to this on Monday.”  The Monday in question was December 8.  By then it did not need an Intelligence analyst to be shown the messages.

On Sunday December 7, a total of 366 Japanese bombers and fighters, brought by aircraft carriers 3,500 miles across the Pacific, attacked the United States warships at anchor in Pearl Harbor.  Four American battleships were blown up, or sank where they lay at anchor.  Four more were damaged.  Eleven other warships were sunk or disabled.  The airfields at Pearl Harbor were also attacked, and 188 American aircraft destroyed on the ground.

In all, in the course of that sudden, unexpected whirlwind attack, 2,403 Americans were killed.  Sixty-eight of them were civilians, and 2,008 of them were sailors, of whom 1,777 were on the battleship Arizona.  The Army lost 218 men and the Marines 109.  With Roosevelt’s concurrence, the full extent of the destruction was withheld from the American newspapers.

There had also been Japanese air attacks during December 7 on United States airfields in the Philippines, where 86 of the 160 American aircraft on Luzon had been destroyed; and on the main British airfield in Hong Kong, where all but one of the aircraft lined up on the tarmac were likewise destroyed.  In a Japanese bombing raid on Singapore, sixty-one civilians were killed.  The airfields of three other United States island possessions – Guam, Midway and Wake – were also bombed.  Batan, the northernmost island in the Philippines, was occupied by Japanese amphibious forces.

In Berlin the American diplomats waited, uncertain as to what would happen.  One of them, George F. Kennan, recalled in his memoirs how for four days after Pearl Harbor “we lived in excruciating uncertainty as the Germans deliberated whether or not to support their Japanese associates by declaring war on the United States.  Realizing that we would look like fools if the declaration of it did not come and we had failed to take this step, we burned our codes and our classified correspondence during the night from Tuesday to Wednesday.”

Hitler had declared war on the United States.  By this single act he made the United States a belligerent in the struggle for the mastery of Europe that was then entering its third year.  Within two and a half years of Hitler’s challenge, a vast American army was to land against Hitler in Northern Europe and to pursue his forces into the heart of Germany.

In declaring war on the United States, Hitler – so close to victory over Russia and yet having had that victory temporarily denied him – did not wish to be seen to stand aside in what he was convinced would be Japan’s victorious confrontation with the United States.  He remained confident that within twelve months he would be the victor in the East against Russia.  Britain would be isolated and alone.  Japan would be the master of the Pacific and of South East Asia.  The Hitler-Hirohito Axis would divide the world and share the spoils.

In the winter in which Hitler failed to defeat the Soviet Union, and declared war on the United States, the Allies decided to declare their war aims.  The declaration was drafted in Washington by Roosevelt and Churchill together.  Twenty-six countries, many of them represented by governments in exile in London, and calling themselves the “United Nations”, signed it.  Issued on 1 January 1942, the declaration stated that the aim of the struggle, and of their own unity, was “to ensure life, liberty, independence and religious freedom, and to preserve the rights of man and justice”.

Esther will be presenting a selection of readings from Sir Martin’s work on Pearl Harbor through the Sir Martin Gilbert Learning Centre.