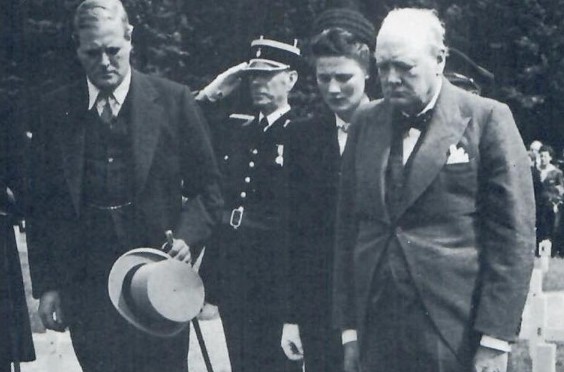 Photo: Winston Churchill with his son Randolph and daughter Mary at an American military cemetery near Namur, 15th July 1946, from Churchill, A Life.

6 June 1968 found Sir Martin on the beach in Portugal where he received word that his former boss Randolph Churchill, Sir Winston’s son, had died. Martin was summoned back to England, to Randolph’s home at Stour in East Bergholt. Within a few months Martin was asked to take on the work of writing the biography of Winston Churchill that Randolph, along with his team of researchers, had begun.

In a letter written on that date the following year, Martin wrote to Sir Isaiah Berlin:

“Today is also the first anniversary of Randolph’s death; and I am on my way this morning to his grave.  It has not been easy taking up his work.  But now that I have begun the actual writing of volume three, which covers the First World War, I feel a new upsurge of energy and inspiration.  When I began to work for him I felt a great deal of fear mingled with a certain amount of awe; after six years the fear had been replaced by admiration and the awe by affection.  And then he was gone:  and neither the honour of having been chosen to carry on his work not the excitement, variety and interest of the work itself can ever obliterate the pain of his departure.”

In his story of his time with Randolph and writing the biography, Martin writes in In Search of Churchill:

It was at Stour, and under Randolph’s gaze, that I learned much about history, and even more about Churchill. The method of work was rigorous. During my early visits I had to read through several files of original material, which I would “sign out” of the strongroom and take to the upstairs workroom. Then I would have the letters in the files typed out, either by Eileen Harryman, or one of several secretaries who were on the payroll at various times, chief among them Barbara Twigg, who reached Stour in 1963 and went on to what Randolph called “the bitter end” (“I hope, dear boy, you will be a ‘bitter ender’?” he once asked me, but I failed him in that regard). “Miss Twigg”, as we knew her at Stour, was with Randolph when he died. Later she became a senior producer with Yorkshire Television.

As soon as the material I had chosen was typed out (Randolph insisted on every document being typed out in triplicate), I would read the typed version to him, standing at an upright desk, just behind his armchair. The desk had belonged to Disraeli. As I read, he would fire questions at me, which I would jot down in the margin. It was then my task to find the answers.

Every aspect of the letters excited Randolph’s imagination and prompted him to want to know more. The questions led me into a realm I had hardly visited during my undergraduate years at Oxford, the personalities, governments and wars of late Victorian England. After each hour or so of reading, I was expected to disappear, bury my head in the reference books, and emerge with all the answers in place. Sometimes I hardly knew the meaning of the questions, let alone how to tackle them.

Work could begin in mid-morning, after lunch, before dinner, or after dinner. Randolph never tired of asking the questions, and was always eager to hear the answers. “Why have you taken so long, dear boy?” was a frequent complaint, even when it seemed to me I had been extremely quick. I did my best, but often floundered. Michael Wolff, whose task was to ensure that volume one of the biography, from Churchill’s birth in 1874 to his escape from a Boer prisoner-of-war camp in 1900, was ready for the printer within two years, was often as exasperated as Randolph by my lack of knowledge.

I was given responsibility for the preparation of short biographical notes for every person who was mentioned in Churchill’s letters: the person he was writing to, the people in the text of the letter, those referred to by name and those referred to by the office they held. This proved a hard task at first. I was used to reading secondary works in which the historian had already established the facts, or, if he had failed to establish them, had left them vague and blurred. Randolph wanted accuracy and detail: at least four or five lines for every person, however obscure.

I was unfamiliar with most of the reference books. Randolph’s library, next to the drawing-room, was rich in nineteenth- and twentieth-century political history. Every day’s work at Stour was an exploration for me. During my three days each week in Oxford doing my own researches on the roots of appeasement (which became a book) and teaching, I began to welcome the moment when I would be on my way back to Stour, and to the biographical queries. Slowly at first, it seemed to me, and to Randolph far too slowly, I began to master the world of reference books. How cross Randolph could be, in those early days, when I revealed ignorance, as I did on my first working visit ….

Within a few months I had learned how to follow up the thinnest clue. Every fragment about a person could be put with another fragment, and built up into three or four lines of detail, if one knew where to look. I also learned how helpful libraries and institutions could be, and how many obscure or difficult queries could be answered by correspondence.

“Lovely grub” was Randolph’s phrase for all our discoveries. History was for him a feast, full of delicious morsels. And so … it became for me.

In Search of Churchill