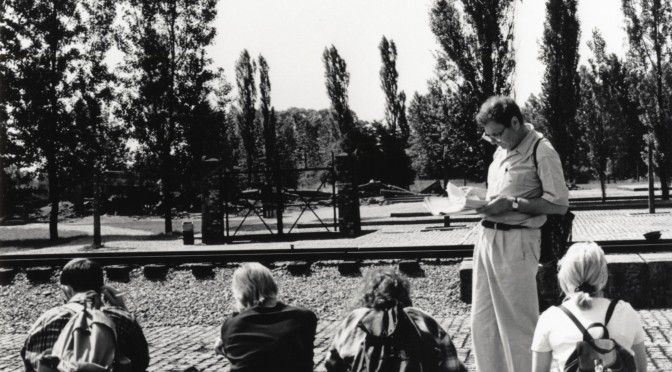 Among his many trips to Poland, the first as a university student in 1959, the last in 2011, was this August 1980 visit to the former Jewish cities, towns and villages, to the mass murder sites and death camps to which the Jews of Europe were taken to be murdered, recorded in a travel journal.  In August 1980, Poland was still a Soviet satellite country, but the “Solidarity” anti-communist trade union began a series of strikes and labour unrest that within a decade brought about a dismantling of the communist government and set an example of anti-communist ideas and movements throughout the Eastern-bloc Soviet-satellite countries.  This is the atmosphere of unrest and instability that greeted Sir Martin when he landed in Warsaw on a journey to uncover a history but thirty-five years old – the same historical span as those days of social and political unrest in 1980 to today:

Last night it was difficult to get to sleep.  Some strange mechanical screeching:  no doubt the hotel’s heating system, woke me up like the screams of the millions who perished.  I had walked last evening – only for a few paces – across the rubble of their once vibrant world.  Now the night was filled with their shrieking.

Travelling from 3 till 8.  A maze of impressions:  the deeply rural character of the countryside, the wooden houses, the story village by village of our people’s suffering, of Polish suffering, of Russian prisoners of war murdered while in brutal and helpless subjugation.

Treblinka was silent, its stone monuments muted, fragmented.  Its “lay-out” incredibly simple:  the railway line, the “ramp”, the road to the gas chamber, the pit for the bodies, and all around, woods, and under foot, even in the very centre of the camp, wild flowers, in beautiful profusion.  I did not have the heart, or courage, to pick one.  The whole scene was a nightmare, in the guise of an idyll.  Even the massive monument at the site of the gas chamber did not seem so large or vulgar, despite its size.  Everything was muted, and the silence was total. Bialystok:  Fifty thousand Jews here once, more than a third of the whole town.  In Tsarist times it was half.  Now they are all gone.  Most of them lie at Treblinka, amid the ash in which the flowers and pine trees grow so profusely.  No individual graves.  No children to mourn.  Their children lie with them.

Wlodawa:  Security police sees me photographing from car, and flags us down.  The Interpress letter does the trick.  The security man is all apologies:  and this on the Soviet border!

Hrubieszow:  Asking the way, the drunks are always the first to push forward their advice, at every street corner.  On to the “nose of the Bug”.  Spectacular views across the Bug to the Soviet Union.

At one point, five gaunt watchtowers; at another, the border force clearly visible about the sandy cliffs of the eastern bank.

At another, a long goods train with two diesel engines shunters on.  The border bridge.  The Polish border barriers.  My guide expresses some inner excitement and nervousness at being so near – for the first time in his life, I believe – to the Soviet border.

Drive to Majdanek, through the early morning hustle of Lublin, and the now familiar queue outside the breadshop. The camp.  The monument.  The walk to the perimeter fence.  The women’s S.S. Barracks intact.  The two lines of wire.  The watchtowers.  The ditches.  The crematorium and gas chamber.  Utterly horrific.  A small room with a low ceiling and a small square grill for the gas pellets.  Off it, a dissecting room to find hidden gold or jewellery.  Beyond it, a room for collecting the dead.  Then, the crematorium itself:  the retorts, the metal “stretchers”, the ovens at the back:  the room at the side: the bath and shower, the “cool room” the S.S. Overseer used when things became too hot and messy.  A wooden frame building.  The brick chimney with its metal rings.  The whole scene utterly revolting:  not a mock up, not a museum, not a replica:  but a gas chamber in which tens and tens of thousands were killed:  more than 50,000 of them women and children.  I feel sick, and filthy.  It is all utterly grotesque.

A flat, dull landscape, even in the evening sun.  Then the excitement of reaching the city, after 2,800 kilometres in search of a lost world, a brief travel in memory of three million murdered people.  Fields, monuments, ruins, dilapidated buildings, a handful of survivors, silent stories, voluble witnesses ….  I have been fortunate to catch a glimpse of the world that came to an end forty years ago:  an abrupt, terrible end, and for me, a tiny, timid glimpse. A thousand photographs, ten thousand questions, a hundred thousand silences …..

For my own grandparents, the story of 1939 to 1945 was an unknown and unsuspected future.  Their world was the world of Tsarist oppression, and hope in emigration.  For my parents, the evil day came when they were in their prime:  when I was a small boy, and when they could only read in horror of the destruction of the world of which their parents, aunts and uncles had once been a part.  And now, for me as an adult, the days of destruction are in the past, the life of the Jews of Poland is in the past, and the hopes they once had for their children were shattered, and never came to pass.  Even their children were murdered.  And no monuments do, or could, record their names and story.  Six million unbuilt monuments, so many million unknown names, and so many million untold stories, and unfulfilled expectations.

As I wandered about the terrible fields of Treblinka, Sobibor, Belzec and Chelmno – four camps devoted to death alone – and the horrendous still standing huts of Majdanek and Auschwitz – I thought again and again of the children, not as babies and young ones, but as men and women of my age.  They too had the promise of growing up, of enjoying the challenges of life, of careers, of struggle, of achievement, of creating life in their turn as fathers and mothers themselves:  all the things that I have been able to do.  But this was denied them.  They had no choice and no say.  They were guilty of no crime.  They were innocent.  And now we shall never know what they might have done in these very towns and villages where I have wandered, and in fifty thousand more such places.  Cities and villages, nations, and civilisation itself, would all have been enriched by their energies.  Now there is a gap and a stillness.  But at night their final cry is still carried on the wind.