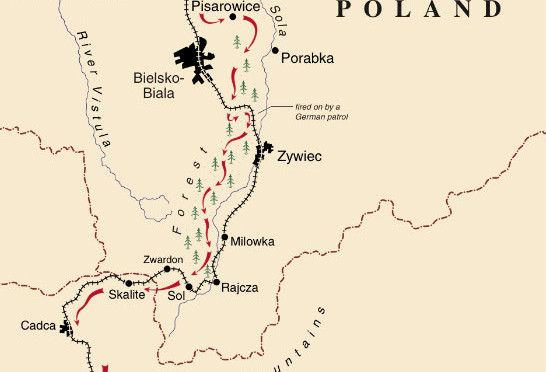 The two escapees were determined to alert the outside world to the reality of Auschwitz, and to the fate that seemed to be in store for the Jews of Hungary. Wetzler, who was twenty-six, had been an actual witness of the destruction of the Theresienstadt family camp. Vrba was nineteen and a half. Both had been brought to Auschwitz nearly two years before. What these two men had seen and learned during those two years was to provide the basis for the first comprehensive report to reach the West.

From August 1942 to June 1943 Vrba had worked in a special “Clearing Commando”, known colloquially as “Canada”, then situated in Auschwitz Main Camp. On the arrival of each train at the railway sidings, the Commando’s task was to drag out the dead bodies, then take all the luggage of the deportees for sorting, and to prepare it for dispatch to Germany. Thus for ten months Vrba was present at the arrival of almost every train, and committed to memory their place of origin and the number of deportees in each.

In June 1943 Vrba was transferred from “Canada” to become one of the registrars in the Quarantine Camp at Birkenau, and as a registrar he had the opportunity of speaking to those new arrivals who had been selected from the incoming trains for slave labour, instead of for gassing. Here again, he both knew and memorized the details of the incoming transports, including the sequence of tattoo numbers allocated to each group as it arrived. In addition, many of the trucks taking people from the railway sidings to Crematorium IV drove past within only a few yards of Vrba’s “office”. As Vrba himself later wrote: “… it was part of my duty to make a summarized report of the whole registration office, which report was daily conveyed to the so-called Political Department of the concentration camp Auschwitz. Having this duty enabled me again and again to obtain first hand information about each transport which arrived in the area of the Auschwitz concentration camp.”

From his “office’, Vrba also witnessed the construction of a new railway siding inside Birkenau itself. Work on this siding, or “ramp”, had begun on 15 January 1944.. “The purpose of this ramp,” Vrba later recalled, “was no secret in Birkenau, the SS were talking about ‘Hungarian Salami’ and ‘A million units’ …. My lavatory was 30 yards from the new ramp, my office about 100 yards.”

Vrba had also been able to make contact with the Czech family camp, as his work as registrar enabled him to move during the daytime between several sections of Birkenau. He could make full use of this ability, he later recalled, “by taking a bundle of papers” with him, moving to a section of Birkenau adjacent to the family camp. Then he could contrive to “get lost” among the prisoners in that section, and without even having to shout, he could speak across the barbed wire between the sections, to other prisoners. There were even times when he had been able to pass written messages across to the family camp, and to receive messages in reply.

Two days before the actual gassing of the family camp, the SS had imposed an internal camp curfew. But a number of those marked out to die had at the same time been transferred to the very section in which Vrba was then a registrar. “Thus, for the last two days of their lives,” he later recalled, “I had unlimited contact with them.”

Like Vrba, Alfred Wetzler had also been a registrar, but in different parts of Birkenau, including the mortuary. He too had established contacts which enabled him to collect information about every aspect of the killing process. The facts which he and Vrba were able to assemble and to memorize, included the number of Jews “put to death by gas at Birkenau” from April 1942 to April 1944, listed by their country of origin, and the dimensions of the camp.

While planning their escape, Vrba and Wetzler had even been able to make contact with several of the Jews forced by the SS to drag the corpses from the gas chambers to the crematorium. These Jewish slave labourers were formed into a special unit, or “Sonderkommando”. At regular intervals, they too would be gassed, and then replaced by a new group. But those whom Vrba and Wetzler contacted were able to give them details about the size and workings of the gas chambers themselves. These facts also the two men committed to memory.

Two hours before the evening roll-call of April 7, Vrba and Wetzler were hidden by their colleagues in a specially prepared hide-out which a number of inmates had prepared during work on an extension of the camp which was then under construction beyond the camp’s inner perimeter. This area, known as “Mexico”, was being prepared to house the expected Hungarian Jews.

The hide-out was a gap in a woodpile, made up of wooden boards. These boards were being stored as part of the building material for the extension of the camp. Before the inmates returned to their barracks within the inner perimeter, they sprinkled the surrounding area with petrol soaks and tobacco, to prevent the two hundred guard dogs of Birkenau, kept there for just such occasions, from sniffing out the would-be escapees. This latter advice had come from the experience of Soviet prisoners-of-war.

At evening roll-call, after the “Mexico” workers had returned to their barracks, the sirens sounded. Two prisoners were missing. The guards and dogs began their search. For three days and nights there was a high security alarm with continuous roll-calls and searches. Throughout those three days a tight cordon of SS guards was kept around both the inner and outer perimeters.

But the hide-away remained undiscovered, and by the evening of April 10, the camp authorities assumed that the two men had already got away. The cordon of SS guards which had surrounded the outer perimeter of the camp was withdrawn.

The search within the outer perimeter of the camp having been called off at 10 pm on April 10, Vrba and Wetzler slipped past the outer line of watchtowers, and with incredible courage set off southwards toward Slovakia.

After their escape, Vrab and Wetzler had worked their way southwards from Birkenau, “without documents, without a compass, without a map, and without a weapon”. Carefully avoiding the German “new settlers” who live, as at Kozy, in former Polish homes, who were often armed, and had the authority to shoot “unidentifiable loiterers” at sight, they headed steadily towards the mountains, shunning all roads and paths, and marching only at night. One evening they were fired on by a German police patrol, but managed to escape into the forest. Later they met a Polish partisan, who guided them towards the frontier, and then, on the morning of Friday, April 21, they crossed into Slovakia, finding refuge with a farmer on the Slovak side, in the small village of Skalite.

During the second week of June 1944 news was finally received in Geneva which was to transform Allied knowledge of Nazi brutality. The source of this news was the information sent from Slovakia, consisting of two separate reports: the detailed account by Vrba and Wetzler of the gassing procedure, and the news brought later by Mordowicz and Rosin, that the deportation of Hungarian Jews was actually in progress, and that they too were being gassed.

Mordowicz and Rosin had reached the Slovak border on June 6, and had made contact, as Vrba and Wetzler had done, with the Slovak Jewish leadership. The two new escapees told their story, not only the facts once more of the nature of life and death at Auschwitz-Birkenau, as Vrba and Wetzler had told, but also their own eye-witness account of the arrival and destruction of tens of thousands of Hungarian Jews in the week before their escape. As Vrba later commented: “Wetzler and I saw the preparation for the slaughter. Mordowicz and Rosin saw the slaughter itself.”

Auschwitz and the Allies