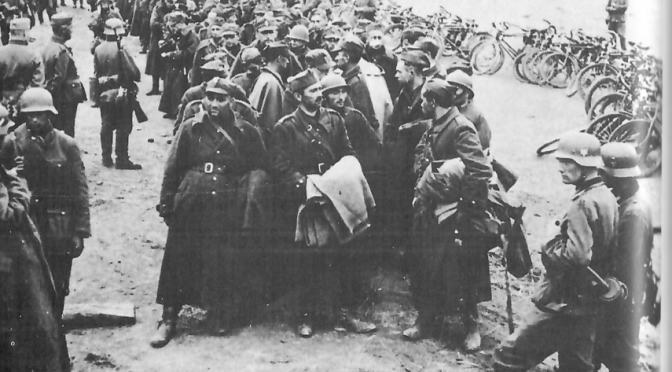 Photo: Polish prisoners-of-war, captured by the Germans in September 1939.

The Second World War, the first phase of which broke out on 1 September 1939 when Germany attacked Poland, had its origins twenty-one years earlier, when the First World War – then known as the Great War – came to an end. Four years of massive slaughter had ended with the hope that, despite the carnage, and the collapse of the Russian, German, Austro-Hungarian and Turkish Empires, global war, fought on land, at sea and in the air, had become a thing of the past.

The Treaties that followed the end of the Great War were dictated by the victorious powers, led by Britain and France. Germany, once the dominant military and industrial power in the centre of Europe, with imperial possessions in Africa and the Pacific, was reduced in territory, disarmed, and saddled with a massive debt in the form of reparations: payments to the victorious powers, and to the countries with whom they had fought, including Belgium, which they had overrun.

From the first days of peace in 1918, and with the signing of the Versailles Treaty in 1919, the German people had a sense of grievance. They had been defeated, although not one victorious soldier had set foot on their soil. They were then forced to pay for the damage done by the German forces fighting on French and Belgium soil. They lost ancient German territory that had never been conquered, including large parts of their eastern regions that were made part of the new Polish Republic, and they lost the whole of the German Empire in Africa. Aspiring German politicians made much of these losses and humiliations. Among the angry voices was that of a former soldier who had been in action throughout the war, had been awarded the Iron Cross, First Class, for bravery, and had been gassed in the war’s final last months – Adolf Hitler.

Hitler’s most powerful weapon was Article 231 of the Treaty of Versailles. This article, which became known as the “war-guilt” clause, stated that the Allied powers affirmed, “and Germany accepts, the responsibility of Germany and her allies for causing all the loss and damage to which the Allied and Associated Governments and their nationals have been subjected as a consequence of the war imposed upon them by the aggression of Germany and her allies.”

Germany was thus made responsible for the war, without any right of appeal, and with the added indignity that the money Germany would have to pay as reparations would be settled by a commission on which Germany could not take “any part whatever”. The Treaty of Versailles also forbade Germany ever to join with Austria, the German-speaking remnant of the defeated Austro-Hungarian Empire that had disintegrated, and out of which independent Czechoslovakia had emerged.

Internally, Germany found itself in the throws of violent revolution and equally violent reaction. Hitler found a powerful platform, denouncing the “perils” of German Communism, and pointing to its imposition in Russia, whose Soviet Socialist Republics stretched from eastern Europe to the Pacific Ocean. European fear of Soviet Communism was intensified during the 133-day Communist regime in Hungary. One antidote to Communism seemed to be the creation of a Fascist regime in Italy, led by Benito Mussolini.

Europe hoped to find a formula to banish war as a way to settle disputes between nations. Under the Locarno Treaty, a democratic Germany – the Weimar Republic that had been established in 1919 – pledged with Britain, France, Belgium and Italy not to attack each other again; the treaty, negotiated in the Swiss town of Locarno, was signed in London in 1925. Locarno also established that any disputes between Germany and Poland, or Germany and Czechoslovakia, that could not be settled between them, would be resolved – not by war – but by international arbitration. Then the United States agreed to step in to make assurance doubly sure. In 1928 the American Secretary of State, Frank B. Kellogg, drew up a Peace Pact that he invited all members of the League of Nations to sign, outlawing war for all time among the nations of the world.

Peace had another enemy beyond nationalism: economic collapse. Germany was particularly hit in 1923 by uncontrolled inflation that destroyed the value of the currency. Unemployment soared. Hitler’s young Nazi Party fulminated against Jews and Communists and accused them of being the cause of their country’s distress. Hitler attempted to seize power in Munich. He was arrested and imprisoned. While in prison he wrote a long, bitter, venomous book, Mein Kampf: My Struggle. Jews and Communists were singled out as enemies to be eliminated. When the world economic crisis struck in 1929, Hitler, no longer in prison, led his Nazi Party to increasing electoral success.

In January 1933, following a prolonged political crisis, Hitler was asked by the German President to become Chancellor. His first legislative acts were to create a dictatorship, expel the large Communist Party representation in the parliament, introduce discriminatory legislation against Jews, and imprison his political opponents in concentration camps that soon came, as Churchill wrote, to “pock-mark German soil”.

Hitler demanded the revision of the Versailles Treaty. Its clauses forbidding Germany to have an army, navy or air force had already been secretly violated by earlier German governments. Hitler began to rearm more rapidly. In 1936 he sent the German Army into the Rhineland – the western area of Germany that the Versailles Treaty had insisted should be disarmed and kept free of German troops. The League of Nations took no action. Britain responded by signing an Anglo-German naval agreement with Germany to enable the German Navy to be enlarged, in the hope that Hitler would then accept a limit to his naval rearmament.

On 12 March 1938 Hitler’s troops entered Austria. Germany then annexed Austria without a shot being fired. Almost immediately, Hitler demanded the annexation of the Sudetenland, the German-speaking areas of Czechoslovakia that had never been part of Germany; they had been part of the Austro-Hungarian Empire until 1918. The British and French Prime Ministers, Neville Chamberlain and Edouard Daladier, bowed to intense German pressure and, at the end of September 1938, at Munich, persuaded the Czechoslovak Government to cede the Sudetenland to Germany. During the discussions at Munich, Hitler promised that he had no desire to include any ethnic Czechs within Germany’s borders, only German-speakers. But on 15 March 1939 he occupied the Czech capital, Prague, and annexed the Czech provinces of Bohemia and Moravia. The Czech people, outnumbered and surrounded on three sides, put up no resistance.

The British and French Governments had accepted Hitler’s word at Munich six months earlier that he had no desire to incorporate non-Germans in the Reich. With more than six million Czechs under his rule following the occupation of Prague, the extent of Hitler’s true territorial ambitions was a matter of grave concern. The German Army and Air force were both increasingly formidable.

On March 31, Britain gave a public guarantee to preserve Polish independence. But, wary of Soviet ambitions, Britain responded coolly to a Soviet request for an Anglo-Soviet alliance, and spun out the negotiations, before bowing to Polish reluctance to see the Soviet Union as part of any European security system

The Soviet Union was isolated, but not for long. On 23 August 1939, Germany and the Soviet Union signed a non-aggression pact. The way was open for Germany to invade Poland without fear of the Soviets coming to Poland’s defence. Indeed, the Nazi Soviet Pact included a secret clause whereby, should Hitler conquer western and central Poland, the Soviet Union would take over eastern Poland.

With the signing of the Nazi-Soviet Pact, Poland’s fate was sealed. Although, two days after the Nazi-Soviet Pact, Britain signed a military alliance with Poland, Hitler was convinced that Britain would not honour this solemn pledge. Had Hitler been right, the Second World War would not have broken out when Germany attacked Poland on 1 September 1939: that attack would have been just one more German territorial advance, with no repercussions once Poland had been defeated. But Hitler had made a grave miscalculation when, in August 1939, he told those closest to him that Britain would not come to the defence of Poland because, he insisted, he had “seen those worms at Munich”. In September 1939 the British were not longer “worms”, but a people who had come to the conclusion that it was better to go to war than to watch Germany march from conquest to conquest unopposed – as hitherto – by any but its immediate victims.