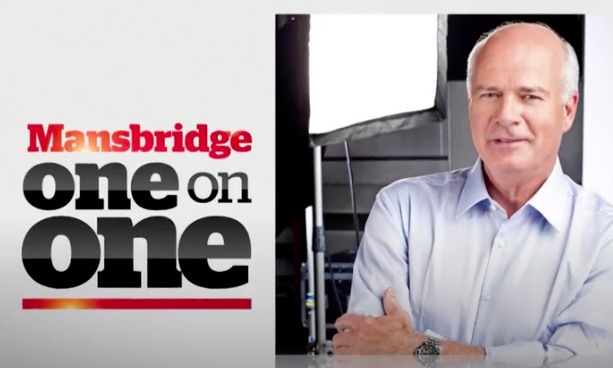 “Mansbridge One on One”

A CBC Interview by Peter Mansbridge

Peter Mansbridge is a British-born Canadian journalist, for twenty years the chief correspondent and anchor of The National, CBC Television’s premier nightly newscast. This November 2006 interview is published by kind permission of the Canadian Broadcasting Company, Peter Mansbridge and Sir Martin Gilbert. Finest Hour thanks Mike Campbell in Halifax, Nova Scotia, for arranging permission with the CBC. (And thank you to David Freeman, editor of Finest Hour, for allowing this reprint.)

Mr. Mansbridge began by saying that although he would like to talk about all of Sir Martin’s thirty books on Sir Winston Churchill, the show was unfortunately only a half hour long. He then asked Sir Martin what defines leadership and great leaders.

Sir Martin Gilbert: I think a great leader has to have a sense of moral purpose, he has to know exactly where he stands on the crucial issues of the day, and, if he is going to be a leader of a western democracy, he must have a real sense that democracy matters, that it has to be defended; a real conviction in his beliefs, and, of course, an ability to transmit his convictions. There are many people who have intense and good convictions but, for one reason or another, do not have the means to transmit them, to get them across — to you and me.

Peter Mansbridge: So, it’s that combination of knowing where you want to go, being convinced that it’s right, and having the ability, not only to attract others to follow you, but to help you get there?

MG: Absolutely. You have to reflect public opinion, but you also have to be able to lead it —perhaps in directions it is a little reluctant to go. It is a complicated balancing act.

PM: How do you judge a leader, and do you have to wait and look back on what they did?

MG: Churchill’s case is interesting, in that he judged himself a failure because during the Thirties, during the great appeasement debate, when he was in Opposition and so few were listening to him, he felt he had failed to produce acceptance for his views that war could be averted by armaments, by alliances, by faith in one’s own ideological, democratic positions. Being called in, as it were, to pick up the mess — to make good the neglect of his advocacy — he did not see as a great achievement: he saw it as a failure that he had been unable to convince the Baldwin and Chamberlain governments to take measures that he — Churchill — believed could prevent war. Of course, for us, his coming to power was a great achievement. One has always to think, what would have happened if he had not had the full confidence of his convictions? What would have happened, when the Blitz was at its height, if he had said to himself, “I don’t think I can go ahead with this”? He came near to that — very near to losing, not his nerve, but to feeling that the power of the enemy was too strong to overcome.

PM: Is leadership different in wartime?

MG: I think so. I think it is much harder also to get to the bottom of what wartime leadership is. So much of war-time leadership — even, indeed especially Churchill’s — is working with a large group of people, drawing on their expertise, allowing fighting men and women get on with the job, encouraging effort and achievement, and not necessarily being a micro-manager. Churchill was not primarily a micromanager, despite his incredible fascination for and grasp of detail. His leadership was that of an inspiring presence, rather then a finger in the pie. In times of peace, perhaps, a leader has to be more pro-active.

MG: Probably. People often ask me, “Would Churchill have been any good on television?” We do not know. In his prime he would probably have been magical on television, as he was on public platforms.

PM: He became Prime Minister in his mid-Sixties. Was that his prime?

MG: I think some of his greatest days were in the five or six years before the First World War, when he spearheaded the great social revolution in Britain, creating the social system in Britain under which we still live. Then there was the greatness of his struggle against appeasement — such an up-hill and dedicated struggle. But yes, certainly his prime was in those first months of the Second World War. In May 1940, when everything seemed hopeless, he also feared that Britain might be defeated. He confided to Anthony Eden six months later, “I awoke every morning with dread in my heart.” Yet he was able to go out and about into the bombed areas and show defiance, and people said, “He does not think we’re beaten.” Even the “V for Victory” sign was “cocking a snook” at the prospect of utter disaster.

In June 1940 Churchill was going into the back door of 10 Downing Street — the door on the Horse Guards Parade — fumbling with his key. A group of men around the nearby statue of Kitchener, putting up scaffolding so it would not be hit by shrapnel (which in fact it was a year later; the marks can be seen to this day), started cheering, “Good Old Winnie!” The Private Secretary with Churchill was puzzled that he kept fumbling with his key to open the door — normally he would go and chat with them or wave to them. So the Private Secretary tugged at him and said, “Prime Minister, the men on the scaffolding…” Suddenly he saw the tears streaming down Churchill’s face. At that moment, with France having capitulated, and German invasion barges gathering in the North Sea and Channel ports, he must have thought the situation was hopeless. But he did not want the men to feel his doubt; to see him without his grin, his defiance, his cigar, his V-sign.

Churchill’s emotions often surprised those who knew him best. General Sir Hastings (later Lord) Ismay, the head of his Defence Secretariat, has recorded in his memoirs accompanying Churchill to the London docks immediately after the first heavy attack of the Blitz. “Our first stop,” Ismay writes, “was at an air-raid shelter in which about forty persons had been killed and many more wounded by a direct hit, and we found a big crowd, male and female, young and old, but all very poor.

“One might have expected them to be resentful against the authorities responsible for their protection; but, as Churchill got out of his car, they literally mobbed him. ‘Good old Winnie,’ they cried. ‘We thought you’d come and see us. We can take it. Give it ’em back.’

“Churchill broke down, and as I was struggling to get to him through the crowd, I heard an old woman say, ‘You see, he really cares; he’s crying.’”

PM: I interrupted you over Churchill’s ability to continue his leadership in the television age.

MG: Churchill was a very adaptable person. In his enormously long life — his time in Parliament spanned sixty-two years — he had to adapt to all sorts of aspects of politics. Where he was very good — and this was unexpected for his contemporaries — was on the radio in its early days. I was astonished to discover that when the BBC wanted in 1926 to have someone make the Christmas appeal for the blind, they chose him. It was a wonderful appeal, because he spoke with wit as well as oratory, with light touches as well as heavy touches. So, he adapted to the radio, as we now know with the famous Second World War speeches.

PM: A question about political hangers-on.

MG: Churchill did not use image-makers, but I came across a fascinating case where he recommended one. When General de Gaulle arrived in London in 1940 — the one hope really of maintaining a fighting France in exile — Churchill was impressed that this man wanted to go on fighting the Germans. I found a note that he wrote to the Cabinet Office the theme of which was that General de Gaulle is our man but he has such a poor personality and presentation that government money should be used to get a leading PR firm to boost his image. So a considerable sum of money was paid to a PR agency, which trained de Gaulle for a month before he made his first great speech from London to the French people.

Although Churchill did not have a “PR man” per se, he did have an excellent literary agent, Emery Reves, who arranged for his articles to be published around the world between 1937 and the outbreak of war in 1939.

PM: After thirty books and having gone through fifteen tons of material during your research, if he were alive today, what would be the one question you would ask?

MG: It would be a question he himself asked, and I would like to know what his answer would be. While the Second World War was in its final stages, he asked a friend, “Do you think I spent too much energy on the German question and not enough on the Soviet question?” I would ask if he thought that he had not done enough, or all that he could have done, in dealing with Stalin in 1944.

PM: What do you think his answer would be?

MG: I would like to feel that it would be “no,” that he would say that he had done all that could be done, that he did his best. But he was a very self-critical person, so he might feel that that he did fail in that regard.

PM: What was Churchill’s greatest contribution in helping us to define leadership?

MG: I think it was a combination of drawing on his vast experience, and his perseverance. So often knocked down, so often marginalized, so often out of power, out of office, he never gave up. On one occasion, when he came to Canada in 1929, he thought perhaps he should give up politics altogether, buy a ranch in Alberta, and become a Canadian rancher!

MG: He wrote to his wife from Banff in 1929, “I am greatly attracted to this country … I have made up my mind that if Neville Chamberlain is made leader of the Conservative Party or anyone else of that kind, I clear out of politics and see if I cannot make you and the kittens a little more comfortable before I die.” But by the time he had completed his holiday, he was back in the cut and thrust of British politics.

PM: Lucky; who knows what would have happened to us if he hadn’t been here?

To read the interview in Finest Hour: https://winstonchurchill.org/publications/finest-hour/finest-hour-135/interview-churchills-lessons-of-leadership/

Read: Churchill: The Power of Words