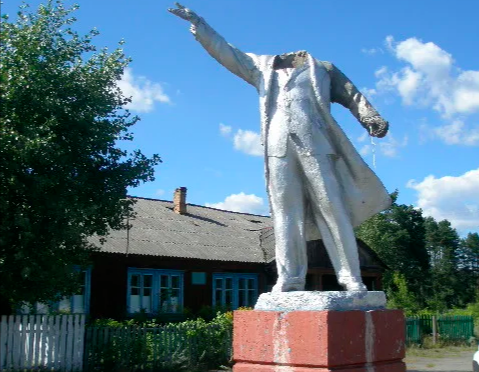 Photo: A Soviet-era statue of Lenin in the tiny hamlet of Zaverichchya, Rivne Oblast, Ukraine, with Ukrainian post-independence commentary, August 2011.

Letters to Auntie Fori, an excerpt

According to the Biblical chronology, Abram, the son of Terah (later known as Abraham), was born in Mesopotamia, some four thousand years ago. His birthplace was the town of Ur, on the River Euphrates, less than two hundred miles from the head of the Persian Gulf, at the eastern end of the Fertile Crescent, which stretched as far as Canaan on the Mediterranean Sea. From the social system described in Genesis, scholars deduce that the story of Abraham took place around 2000 BC. The BC-AD dating, incidentally, is the Christian one, Before Christ and Anno Domini, the Year of the Lord. In recent years Jews have come increasingly to refer BCE and CE – Before the Christian Era, and the Common Era.

As a young man, Abraham turned against the idols worshipped by his tribe, one of many small communities of farmers and shepherds. According to rabbinic tradition, when he found himself alone with the idols of his father he took hold of an axe, smashed all but the largest, and then, in a gesture of contempt, rested the axe on the arm of the largest idol.

When Abraham’s father saw the destroyed idols he was deeply distressed. What has happened? he asked. Abraham replied that it was the largest idol – still holding the axe – which had destroyed the others. “If you don’t believe me, ask him.”

“You are telling lies,” Abraham’s father replied. “These are only wood and stone which I made myself.” To which Abraham answered: “So how can you worship these idols who have no power to do anything?”

Abraham then heard the words of a greater God, a singular God, and became the first person to understand – and believe in – monotheism. The Bible records that God then said to Abraham: “Get thee out of thy country, and from thy kindred, and from thy father’s house, unto a land which I will show thee.” Obeying God’s call, Abraham left the fertile lands of Mesopotamia with his family and flocks. His father went with him. They travelled northward and eastward, following the fertile valley of the Euphrates, towards a land – Canaan, later known as Palestine – which God promised to Abraham’s descendants.

Abraham travelled southward, reaching the town of Hebron (the scene of so much Arab-Jewish violence nowadays!), where he built another altar to God. He and his wife Sarah were puzzled as to how God’s promise about their descendants could be fulfilled: they had no children, and Sarah was past child-bearing age. It was Sarah who then suggested to Abraham that he have a child with her Egyptian maidservant, Hagar.

God also explained that his covenant would not be with the descendants of Ishmael, Hagar’s son – who was then thirteen years old – but only with those of Sarah. ….

Their son, Isaac, was born as predicted. After Isaac’s birth, Ishmael was sent away into the desert. There, as he lay dying of thirst, God told Hagar: “Arise, lift up the lad, and hold him in thine hand; for I will make him a great nation.” She then opened her eyes and “saw a well of water.” Ishmael drank, and survived. Later he married an Egyptian woman. They made their home in the desert.

The Arabs of today claim their descent from Ishmael, and are proud that he was Abraham’s first-born son. According to Muslim tradition, which my own rabbi, Hugo Gryn, a leader in Jewish-Muslim dialogue, always liked to recall – Abraham made his way across the deserts of Arabia to visit Ishmael, who was then in Mecca, and together they built the Ka’aba, which became the centre of the annual Muslim pilgrimage, the Haj.