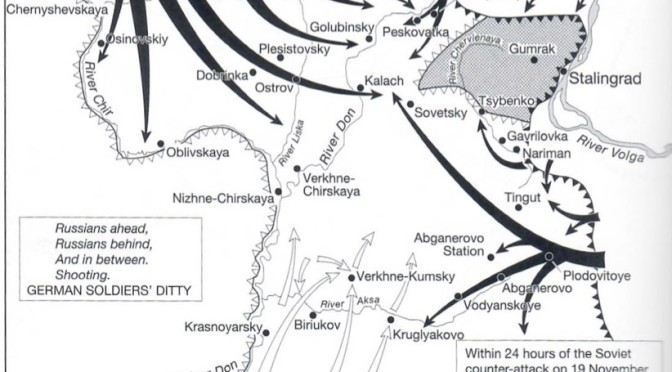 Above Germany, British bombers, carrying out the Casablanca directive of Roosevelt and Churchill, attacked Berlin during the daylight hours of January 30 and Hamburg that same night. The raid on Berlin had been timed to coincide with radio broadcasts by both Goering and Goebbels declared: “A thousand years hence, every German will speak with awe of Stalingrad and remember that it was there that Germany put the seal on her victory” 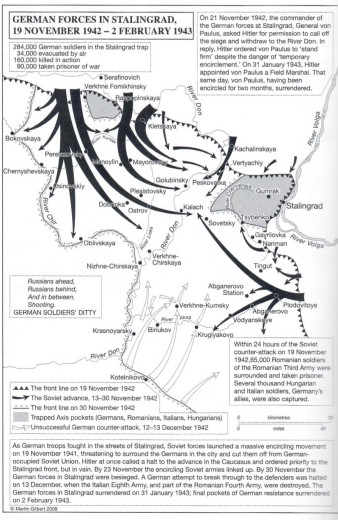 The final surrender at Stalingrad, 2 February 1943, from the Routledge Atlas of the Second World War

Also on January 31, Hitler appointed von Paulus to be a Field Marshal. It was the very day on which von Paulus surrendered. The German Sixth Army, victors in May 1940 in Holland and Belgium, had not been cut into two separate pockets. Forty-eight hours after von Paulus, in one pocket, surrendered, those in the second pocket also gave up. Of the 284,000 German soldiers originally caught in the Stalingrad trap, 160,000 had been killed in action by January 31. A further 34,000 had been evacuated by air. The survivors, 90,000 frost-bitten and wounded men, were marched eastward, on foot, to Siberia. Tens of thousands died during the march, and tens of thousands more in captivity.

Goebbels’s boasting, and Hitler’s confidence, had for the first time been held up to mockery. The news of the surrender of so vast a German force, and of Stalingrad’s liberation, brought renewed hope to the armies struggling against Germany, and to the captive peoples suffering so cruelly throughout German-occupied Europe. After nearly three and a half years of victories, conquests, advances and the exhilaration of creating fear and uncertainty, the Germans appeared vulnerable. The inevitability of triumph was gone. That day, determined not to lose a single hour of advantage, Allied bombers stuck at German airfields and military installations in Sicily.

An excerpt from Second World War, A Complete History