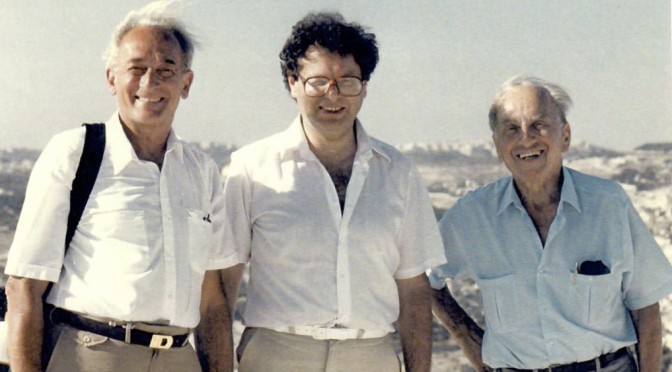 Photo: Jack Brauns, Martin, Avraham Tory, in Israel, 1980s (Jack Brauns, a survivor of Kovno, was the son of Dr Moshe Brauns, Director of the Jewish Hospital and Head of Infectious Diseases in the Ghetto)

Like all the captive peoples – Poles, Czechs, Serbs, Greeks, Dutch, Danes, and many more – and in even fiercer measure, the Jews were confronted by all the cruelties, uncertainties, and sudden shifts of policy of Nazi totalitarianism. More than any other captive people, they understood from the very first days of German conquest and occupation that their one hope lay in living through the years of Nazi domination, however long those years might be. Uberleben, “to live through,” was the aspiration of more than 50 million people; the 8 million Jews of Europe had no alternative but to share this aspiration and to share it with the knowledge that they were to be the first victims – that it was not intended that they should survive at all.

The several hundred Eastern European Jewish Councils, including that of the Kovno Ghetto, on whom fell the burden of administrative contact with the Germans, daily faced the question of how best to protect those within their particular Ghetto from starvation, disease, and the constant threat of murder. None of these councils were able to avoid carrying out the orders the Germans sent through to them, although, as Tory’s diary makes clear, the Kovno Jewish Council devoted considerable time and energy to trying to mitigate the effect of those orders.

The Jewish Council in the Kovno Ghetto, like those in the majority of Ghettos throughout Eastern Europe and western Russia, encouraged a substantial range of acts of self-preservation and preparation for resistance in case the Germans should ever move to destroy the Ghetto altogether, a fate which, though often feared, could never be known for certain, and could seldom be anticipated by more than a few weeks or ever days.

One rescue effort in Kovno was the preparation of “malines” – hiding places under buildings and in cellars – in which, in July 1944, more than a thousand Jews were to hide when the Germans finally decided, on the eve of the arrival of the Red Army, to destroy the Ghetto.

From the fall of 1942 to the summer of 1944, the Jewish Council in the Kovno Ghetto acted on a daily basis to ensure the preservation of as much of Kovno Jewry as possible: to feed, to guard, to maintain morale, to protect. We know about similar activities in other ghettos; Tory’s diary is a full and sustained account of them. It therefore enables the reader to see the absurdity of the often reiterated suggestion – made by those who ignore the conditions of all Europe’s captive peoples under Nazi rule – that Jews participated in their own destruction. They participated in a desperate, prolonged, and tormented struggle to survive.

The Jews, confronted with greater hatred than existed against any other captive peoples, found, in the main, in their wartime community leaders, those who were determined not to give the Germans the victory. These leaders in the unequal relationship between conqueror and conquered – Jewish leaders such as Dr Elkes in Kovno – were often bewildered and uncertain; but as Tory’s diary shows, the Kovno Jewish Council saw itself in the forefront of the battle for survival, and acted, despite the daily uncertainties, to seek the survival of everyone in the Ghetto, and of those brought into it from outside.

From the Introduction : Surviving the Holocaust, The Kovno Ghetto Diary By Avraham Tory