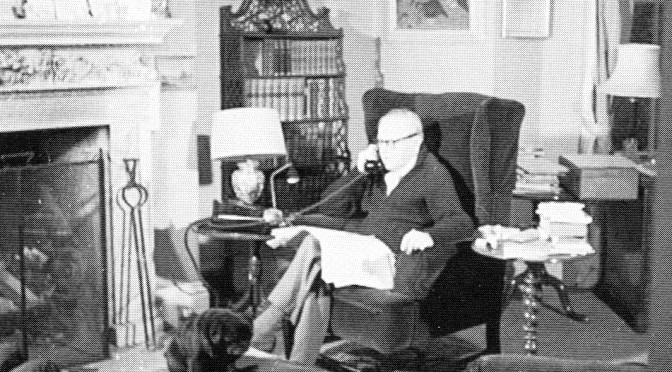 My employment with Randolph Churchill began in October 1962, on my twenty-sixth birthday. Given Randolph’s reputation for drink and anger, my friends and I assumed that my engagement would be of short duration. I was still there, as part of his team of ‘young gentlemen’, or ‘ghosts’, four and a half years later.

Randolph made many enemies by his often violent conduct, but he could be kind, considerate and generous. On my first working day at Stour, which was also my twenty-sixth birthday, he somewhat shyly handed me a gift: a copy of his book Fifteen Famous English Homes, inscribed ‘Martin Gilbert from Randolph S. Churchill’. A month later he gave me another of his books, The Rise and Fall of Sir Anthony Eden, inscribed ‘Martin from Randolph’. I had been accepted as part of his team.

Work could begin at any time of the day, or night: in mid-morning, after lunch, before dinner, or after dinner. Randolph never tired of asking the questions, and was always eager to hear the answers. ‘Why have you taken so long, dear boy?’ was a frequent complaint, even when it seemed to me that I had been extremely quick.

In the course of his Churchill work, Randolph would ask for notes and outlines for things that he was preparing outside the biography. One such effort, on which I worked quite hard, was a film script on the life of Hitler which was commissioned by Granada Television. The scheme, under which he would be the presenter, and which he looked forward to enormously, was abandoned after he quarrelled with the producer the first time they met, in a Granada studio in London. ‘I refuse to work with a woman’, he said, and walked out – to the Café Royal.

In March 1964 I spent thirteen consecutive days with Randolph. Several of my friends wondered whether I could possibly survive unscathed, that is to say, without being sacked, but I did.

Randolph was an exacting taskmaster and at the same time a generous employer. At a time when he was paying me a good salary, he wrote to me in Oxford from Stour: ‘Looking at my salary book I see that you are being scandalously underpaid,’ and proposed a generous increase. When a research assistant had angered him and was sacked at midnight, the next morning on the breakfast table was a blank cheque signed by Randolph for the young man to fill in. Kindness and anger were inextricably mixed up in his brain, the first warm and encouraging, the second sometimes frightening in its intensity.

A source of constant amelioration was Randolph’s friend Natalie Bevan. The colourful, animated pottery figures that she made, some of which (including four large trumpeting elephant candle-holders) graced Randolph’s table, reflected her own colourful character. When storms brewed, her presence could avert the worst dramas. Her arrival at Stour was something much to be looked forward to. She was always ready with words of comfort for us researchers when Randolph made life difficult.

In the summer of 1964 the work load was lightened by the arrival of an enthusiastic young American, George Thayer, who later wrote a book on extremist right-wing groups in Britain, and worked for a Congressman on Capitol Hill. His career was cut short by his early death from cancer.

In September 1964 all four researchers (Michael Wolff, Andrew Kerr, George Thayer and myself) and the four secretaries on the payroll at the time received a collective exhortation, one of Randolph’s (and his father’s) favourite verses:

The heights of great men reached and kept,

Were not attained by sudden flight,

But they, while their companions slept,

Were toiling upwards in the night.

Randolph’s personality, with its exhortations and eccentricities, kept the team on its toes. On one occasion a telegram arrived in which the address was given not as East Bergholt but Beast Bergholt. He announced at once, with a broad grin, that he was now ‘the Beast of Bergholt.’

Research successes were not always enough to avert Randolph’s anger. One day when I was at Oxford, a telegram reached the College Lodge informing me that I had been sacked. The reason for my sacking had nothing to do with my researches. Some grouse had reached Stour, by rail, as a gift from the Secretary of State for War, John Profumo. Having probably been shunted onto a siding for too long during their journey, they were no longer edible; this only became clear when they were at table. At the end of a letter to Profumo, thanking him for some historical material he had sent (the fifty-year rule for public documents meant his permission was needed to see government archival material even for 1914), I mentioned the fact that the grouse were off. On receiving my letter he had telephoned Randolph to offer some more.

Profumo’s call revealed that I had, unwittingly, broken a house rule, unknown to me at the time. As Randolph explained, in furious tones: ‘I cannot have people who are working for me and who come to my house complaining about the food behind my back to people who had sent it. I cannot abide the idea that anyone staying and working in the house does not have his primary loyalty to myself. If you blab about the food in a mischievous way you might, for all I know, blab about graver matters.’ If I wanted to work on research in Oxford and elsewhere at a reduced salary, he suggested that I should contact Michael Wolff. ‘But I do not wish you to come back here.’

Advice came that same day from Andrew Kerr: ‘Suggest you write groveller.’ I did so, and received a telegram from Randolph in reply: ‘Thank you for your letter. The matter is closed.’ ‘Welcome back,’ he said when I next returned to Stour. ‘I am sorry about what hap­pened. We won’t speak about it again. Now tell me dear, what have you brought me to read?’

There was a sequel to this episode six months later when Profumo resigned. Randolph was shocked by the virulence of the newspapers, and by the way in which the Profumos were to all intents and purposes besieged in their own home. In strictest secrecy, so that it never reached the ears of any journalist or the lens of any press photographer, he offered Stour as a sanctuary. I still have the instruc­tions we were all given, headed with the codename ‘Operation Sanctuary’, marked ‘Secret’, and explaining how we were to look after ‘OGs’ (Our Guests).

Randolph would leave the country to be with his father on board Aristotle Onassis’s yacht Christina. ‘Our friends will seek to come here to Stour unobserved.’ If they were observed ‘admission of the Press to the house or garden will be denied.’ If interlopers broke into the garden ‘they will be requested to leave.’ If they refused, the police would be called, ‘during which time our guests will retire upstairs. We will not stand any rot.’

The Profumos were to be treated as if they were in their own home. Randolph’s staff were instructed not to ‘blab’ in the village. If the Profumos wished to go abroad ‘they should fly from Southend to Dieppe and should charter a car on arrival on the continent and “disappear none knows whither”.’ In fact there was never any idea in the Profumos’ mind that they would go abroad, despite newspaper speculation. Randolph, as usual, was trying to cover all possibilities.

I was impressed by Randolph’s gesture, one of real affection and goodness. I knew that, as a young MP, Profumo had been one of the Conservative Members who voted against Neville Chamberlain on 8 May 1940, making possible Churchill’s premiership two days later. At that time Profumo was the youngest MP. He had entered the Commons at a by-election only two months before the decisive vote and had not yet made his maiden speech. When I reminded Randolph of this, he urged me to write it up and to send it not to one newspaper but to all of them. I did so, and about a dozen papers published it. It was my very first published foray into public life.

Randolph’s generous nature, like his father’s, could be stirred by a tale of injustice. One afternoon a pupil of mine at Oxford was pictured in a London evening newspaper, and pilloried, for a drug-related offence. I brought Randolph the newspaper that same afternoon. As soon as I had told him the young man’s story, he telephoned the newspaper editor and demanded the removal of the offensive photograph. It was taken out in the later editions.

I learned at Stour that history was concerned with character and humanity, as well as with facts and achievements.