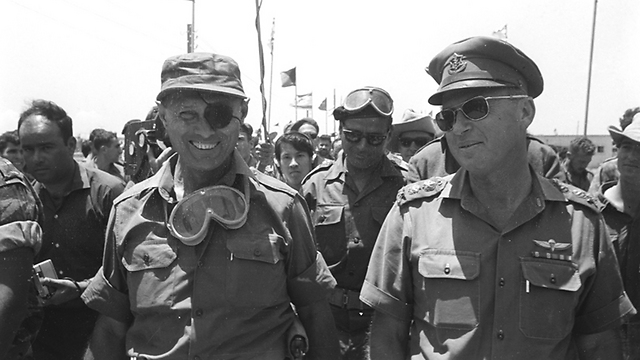 In the immediate aftermath of the Six Day War, a debate began inside Israel that was to continue for the next three decades: how to rule, and for how long to rule, the Palestinian Arabs. The Cabinet position was that for “full peace” Israel would be ready to withdraw to the borders of before the war. With regard to Syria, the Cabinet stressed the added importance of ensuring that security and water problems were first resolved. This as not a partisan decision: the National Unity Government formed by Eshkol on the eve of the war was still in place, with Begin as the senior Likud representative.

A few people argued with urgency that the West Bank and Gaza Strip ought to be given back as quickly as possible, that even a temporary occupation would hold grave disadvantages to the occupying power. But these were very much minority voices. The State was not yet twenty years old, yet its conquest of the West Bank and Gaza Strip seemed something that would last for a long time; and it was certainly to overshadow, and at times to dominate, all earlier purposes and ideals, and still to be a contentious and painful issue thirty years later.

Even as the war had been fought, the question of how to rule over so many Arabs was being asked, and answered. On June 7, Moshe Dayan had been asked by Chaim Herzog – newly appointed Military Governor of Israel’s military forces on the West Bank – “What is our policy? What am I supposed to do?” Dayan’s reply (which Herzog later recalled in a conversation with Dayan’s biographer, Robert Slater) might have served as a blueprint for the years ahead: “You are supposed to see that everything returns to normal,” Dayan told Herzog. “But don’t try to rule the Arabs. Let them rule themselves. Of course, they have to know you’re the boss. It’s enough that we suffer from Israeli bureaucracy. They don’t deserve it. In a nutshell, I want a policy whereby an Arab can be born, live, and die in the West Bank without ever seeing an Israeli official.”

At first such a policy was put into effect, with Israeli military command posts being located away from the main Arab thoroughfares in the West Bank and Gaza. When Dayan learned that a third of the Palestinian homes in Kalkilya had been blown up by Israeli forces as a reprisal for Arab sniping at Israeli soldiers, he ordered the destroyed buildings (800 in all) to be rebuilt, and their inhabitants, who had fled to Nablus and to various villages or were living in the fields, to be allowed back. This was the exact opposite to the policy pursued, including by Dayan, in the War of Independence. The Six Day War was not intended to see a second round of flight and expulsion, or the creation of empty Arab towns which would then be filled by Jews. The West Bank and Gaza Strip were to remain Arab, and to be administered, not annexed or settled; but until when they were to be occupied no one knew.

In the immediate aftermath of the Six Day war, the Palestinian population behaved as if in a state of shock. It seemed amenable and cooperative to its new rulers, and there was a general feeling among Israelis that theirs was indeed an enlightened and benign occupation. Israelis were shocked to find how restrictive Jordanian rule had been, and how the Jordanians had very much relegated the West Bank to subordinate status within the Hashemite kingdom, neglecting its economy and failing to encourage its local institutions and aspirations.

If Jordan had not been a particularly forward-looking occupying power, despite its Arab Muslim and even Palestinian affinities, Israel had confidence that it could be a benign occupier, capable of enhancing the prosperity of the whole region. In addition, to many Israelis, Dayan among them, for whom biblical locations and episodes were second nature, the West Bank was not just occupied land but a part of the historic Land of Israel. Even if they had no desire to rule it indefinitely, or to annex it, they felt an affinity with it. Direct links abounded: Abraham, Isaac and Jacob were buried in it (at Hebron), David had ruled over it (at first from Bethlehem), two Jewish kingdoms had been established over it, in Judea and Samaria.

Dayan, with his memories of the British Mandate, did not want a repetition of the bitterness of ruled against their rulers that he had seen intensified in the years before 1948 in the relationship between the Jews and the British. In interviewing the officers being appointed as governors and deputy governors of the West Bank towns, he had a clear picture of the type of man he did not want. Referring to the first Governor of the Gaza Strip, Dayan said, “I don’t need someone like Motta Gur, who is a good officer, but when he enters the room all the notables of Gaza have to get up as if he were a British governor-general. We are not British here. This isn’t what I need. I need someone who is admired but still respected by the Arabs.”

Whether occupiers could ever be respected, whether occupation could even be benign, was a question seldom asked in Israel during the early days of occupation. But even in those early days there were those who asked it, and who were worried at the effect of occupation, both on the anger of the ruled, and the arrogance of the rulers. Interviewed by the American journalist Joseph Alsop, Dayan made himself the point: “We must not interfere, become involved, issue permits, make regulations, name administrators, become rulers. For if we do, it will be bad for us.”

An excerpt from Israel, A History ©Martin Gilbert