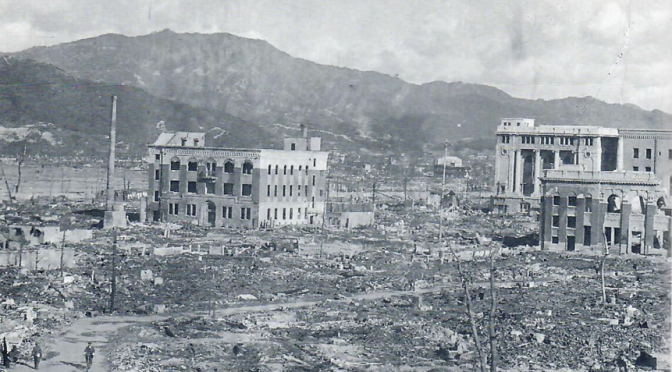 Photo: Hiroshima; the scene near the centre of the atomic explosion of 6 August 1945

The scale and nature of the destruction of human life at Hiroshima was eventually to alter the whole nature of how mankind looked at wars, power, diplomacy and the relationships between states. In the days when its reality was only slowly becoming apparent, it was the terrifying human aspects which each survivor could not shake out of his or her nightmares. “Mother was completely bedridden,” a nine-year-old boy later recalled of the days following the bomb. “The hair of her head had almost all fallen out, her chest was festering, and from the two-inch hole in her back a lot of maggots were crawling in and out. The place was full of flies and mosquitoes and fleas, and an awfully bad smell hung over everything. Everywhere I looked there were many people like this who couldn’t move. From the evening when we arrived mother’s condition got worse and we seemed to see her weakening before our eyes. Because all night long she was having trouble breathing, we did everything we could to relieve her. (Continue Reading) The next morning grandmother and I fixed some gruel. As we took it to mother, she breathed her last breath. When we thought she had stopped breathing altogether, she took one deep breath and did not breathe any more after that.”

That was thirteen days after the bomb had exploded over Hiroshima; by then, the death toll had risen by a further twelve thousand, reaching 92,233. It was to rise still further in the following years from the illnesses resulting from radiation. In 1986, the number of identified victims was given on the Cenotaph in Hiroshima as 138,890. People were still dying from the effects of radiation nearly half a century after the bomb was dropped.

The “momentous day” had come to hundreds of thousands of Allied prisoners-of-war, scattered and confined throughout the unconquered Empire. Kenneth Harrison, an Australian soldier who had been captured at Singapore and had worked on the “Death Railway” in Thailand was at the time of the Japanese surrender, in a prisoner-of-war camp in Japan itself. Later he recalled how “the tremendous exultation of our first night as free men was followed by a most unsatisfactory and unsettled week that came somewhat as an anti-climax. The Japanese made no official admission that they had surrendered, and they still controlled the camp ‘to keep out angry civilians’. For this reason we were warned not to sing and dance, although this admonition came rather late and was completely ignored. It was a strange twilight period in which we were neither free men nor captives, and the balance of power between us and the Japanese was a delicate thing.” Only on August 22, Harrison noted, “just as the pessimists were lapsing back into gloom and doubt, we had the first official admission that the mightiest conflict the world had known had indeed ended. A haggard, white-faced Japanese Camp Commandant addressed the assembled prisoner-of-war and said that hostilities had ended on 18 August. He asked us to stay quietly in the camp until we could be taken home. Alas, we were to shatter these fond hopes, for Camp Nakamura became unique in that its occupants were to flow over half of Japan with all the happy zeal of tourists.”

Among the cities visited by Harrison and many of his fellow prisoner-of-war was Hiroshima. “The reality,” he wrote, “was the girl with scarred features who passed with averted face. And the listless people who went by so dully; the scarred people; the burnt people; the apathetic people. And the people who even now showed not the slightest sign of hostility or resentment. Saddened and depressed beyond words at the magnitude of the tragedy, and feeling like ghouls, we decided to leave Hiroshima that same day. There was little to keep us there; nothing to see; no place to rest; nothing to eat; nothing to drink”. Harrison added: “Fortunately for our peace of mind we knew nothing of such atomic age refinements as radiation sickness, and although we occasionally picked up a statue or kicked over a strangely fused piece of metal for a closer look, we were never tempted to take a souvenir. One does not rob a tomb.”