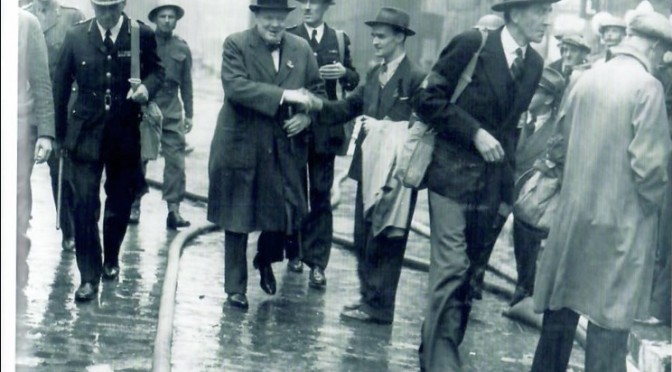 Photo:  Churchill inspects bomb damage in London during the early stages of the Blitz, 10 September 1940

We have to think of the future and not of the past. This also applies in a small way to our own affairs at home. There are many who would hold an inquest in the House of Commons on the conduct of the Governments – and of Parliaments, for they are in it, too – during the years which led up to this catastrophe. They seek to indict those who were responsible for the guidance of our affairs. This also would be a foolish and pernicious process. There are too many in it. Let each man search his conscience and search his speeches. I frequently search mine.

Of this I am quite sure, that if we open a quarrel between the past and the present, we shall find that we have lost the future. Therefore, I cannot accept the drawing of any distinctions between Members of the present Government. It was formed at a moment of crisis in order to unite all parties and all sections of opinion. It has received the almost unanimous support of both Houses of Parliament. Its Members are going to stand together, and, subject to the authority of the House of Commons, we are going to govern this country and fight the war.

It is absolutely necessary at a time like this that every Minister who tries each day to do his duty shall be respected, and their subordinates must know that their chiefs are not threatened men, men who are here to-day and gone to-morrow, but that their directions must be punctually and faithfully obeyed. Without this concentrated power we cannot face what lies before us.

Martin’s introduction: There was bitterness in France that Britain had not been able to do more to help halt the German advance, but the weight of German armour and air power was formidable. There was also bitterness in Britain against the pre-war Ministers who had failed to put Britain in a stronger position militarily and in the air.