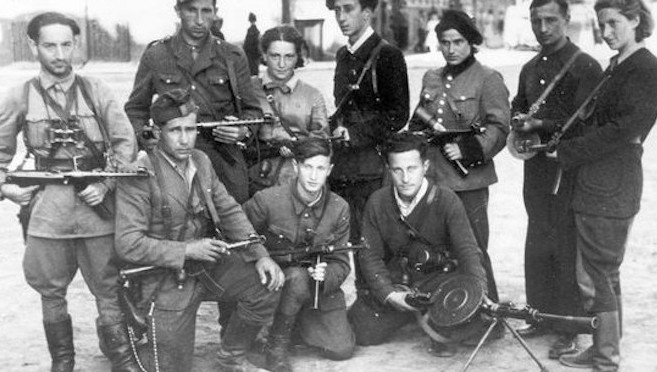 In the Vilna Ghetto, a resistance organization had been growing, led by Yitzhak Wittenberg. Among its actions was the sabotage of German troop trains in the area around Vilna, using explosives smuggled out of the ghetto to partisans in the neighbourhood. On 8 July 1943, a Jewess, Vitka Kempner, managed to leave the ghetto, together with two colleagues, carrying a landmine. Their objective was to blow up a German military train five miles south-east of the city. They planted the mine, and nobody noticed them.

Within a week of this “triumph”, one of the members of a Lithuanian Communist group captured by the Gestapo, revealed under torture the name of the resistance commander. On the night of 16 July 1943, Wittenberg and other members of the United Partisan Organization were at a meeting with the head of the Jewish Council, Jacob Gens, when armed Lithuanian policemen burst into the room and Wittenberg, in fetters, was led away.

As Wittenberg and his escort were about to leave the ghetto, Jewish partisans attacked the escort, and rescued Wittenberg, still in fetters. The SS then announced that if Wittenberg was not handed back to them, they would burn the ghetto to the ground.

One of Wittenberg’s partisan colleagues, Abba Kovner, who had been present when Wittenberg was seized and taken away, later recalled how, at two in the morning, Gens summoned the Jews of the ghetto, telling them “that because of this one man, Wittenberg, the ghetto may be destroyed and annihilated”. There was chaos in the ghetto, with Jews attacking the partisans and demanding that they hand Wittenberg over. “You cannot endanger the ghetto for one man,” they insisted.

Wittenberg’s colleagues went to the attic where their commander was in hiding. “Give an order and we shall fight,” they told him: Jew would fight Jew to prevent the partisan leader being handed over.

Outside, a crowd of Jews, assembled by Gens, was shouting: “We want to live.” Wittenberg agreed to be guided by his Communist colleagues, who urged him to surrender. Appointing Abba Kovner as his successor, Wittenberg walked out of his hiding place and turned himself over to the Gestapo. At attempt was made to smuggle cyanide into his prison cell, but it failed. It is thought that he managed to kill himself before he could be tortured.

The surrender of Wittenberg, Abba Kovner later declared, was “one of the greatest acts of heroism of the Jewish fighting underground in the ghetto”: the avoiding of conflict between Jew and Jew.

Note: Martin’s main source for this episode is the testimony of Abba Kovner at the Eichmann Trial, 4 May 1961, session 27.

Excerpt from The Holocaust