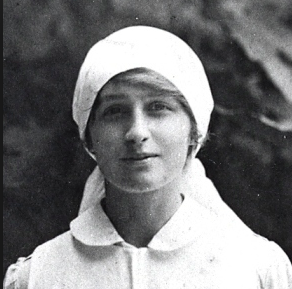 Along with reading wall plaques and war memorials, Martin also believed in visiting war cemeteries in whatever region or country he found himself. One of the more powerful and overwhelming is that of the Commonwealth War Graves Cemetery in Étaples, France which contains the graves of 11,516 casualties, 11,434 from the First World War. In fact it is the largest Commonwealth War Graves Cemetery in Europe. Part of the reason it is so large is due to the extensive hospitals that had been located there, in which many of the 2,500 women who served there worked, among them, Vera Brittain, the English poet, diarist and nurse. Martin describes one experience she relates while at Étaples, April, 1918:

Vera Brittain was leaving her sleeping quarters to return to the ward when she had to wait to let a large contingent of soldiers pass by along the main road. ‘They were swinging rapidly toward Camiers,’ she later recalled, ‘and though the sight of soldiers marching was now too familiar to arouse curiosity, an unusual quality of bold vigour in their stride caused me to start at them with puzzled interest. They looked larger than ordinary men; their tall, straight figures were in vivid contrast to the under-sized armies of pale recruits to which we were grown accustomed. At first I thought their spruce, clean uniforms were those of officers, yet obviously they could not be officers, for there were too many of them; they seemed, as it were, Tommies in heaven. Had yet another regiment been conjured out of our depleted Dominions? I wondered, watching them move with such rhythm, such dignity, such serene consciousness of self-respect. But I knew the colonial troops so well, and these were different; they were assured where the Australians were aggressive, self-possessed where the New Zealanders were turbulent.’ Then she heard an excited cry from a group of nurses behind her, ‘Look! Look! Here are the Americans!’