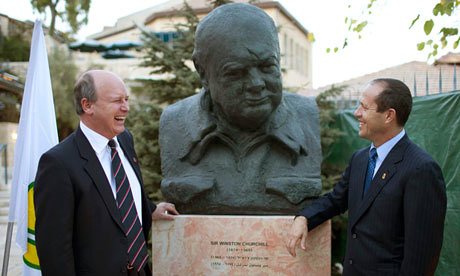 For the first half of this century, during one of the longest active political careers in this country, Winston Churchill was interested and sympathetic to Zionism. Hating tyranny in all its forms, he had reacted strongly against the Tzarist pogroms in the first years of the century and always understood the desperate need of a haven for Jews.
“I recognise,” he wrote in a private letter on 2 January 1906, “the supreme attraction to a scattered and persecuted people of a safe and settled home under the flag of tolerance and freedom.” Two years later, on 30 January 1908, he wrote in another letter of his sympathy with the “ultimate goal” of the Jewish people. As he explained in his letter: “Jerusalem must be the only ultimate goal. When it will be achieved it is vain to prophesy: but that it will some day be achieved is one of the few certainties of the future.”
Churchill’s own efforts to help establish a Jewish national home in Palestine were at their most intense throughout 1921 and 1922 when, as Colonial Secretary, he was directly responsible for the evolution of British policy in the Middle East.

As early as 8 February 1920, Churchill had declared in a newspaper article: “If, as may well happen, there should be created in our own lifetime by the banks of the Jordan a Jewish State under the protection of the British Crown which might comprise three or four millions of Jews, an event will have occurred in the history of the world which would from every point of view be beneficial.”

While Churchill was in Jerusalem, in March 1921, he spoke sternly to the Palestinian Arab leaders telling them: “It is manifestly right that the Jews, who are scattered all over the world, should have a national centre and a National Home where some of them may be reunited. And where else could that be but in this land of Palestine, with which for more than 3,000 years they have been intimately and profoundly associated?”

Churchill envisaged Britain holding the ring in Palestine until such time that the Jews formed a majority of the inhabitants, whereupon the Jewish State would come into existence. Pressed as to whether he meant that the Jews would have “control of the government,” Churchill replied to the Canadian Prime Minister at the Imperial Conference on 22 June 1921: “If, in the course of many years, they become a majority in the country, they naturally would take over.”

This the Palestinian Arabs refused to accept, and in London on 22 August 1921, they once more urged Churchill to bring a complete halt to Jewish immigration. Churchill rejected this appeal, telling the Arabs: “The Jews have a far more difficult task than you. You have only to enjoy your own possession; but they have to try to create out of the wilderness, out of the barren places, a livelihood for the people they bring in… they were in Palestine many hundreds of years ago. They have always tried to be there. They have done a great deal for the country. They have started many thriving colonies and many of them wish to go and live there. It is to them a sacred place.”

Churchill reiterated this view when he spoke to the Peel Commission in 1937, telling them that he had always believed that the intention of the Balfour Declaration was that Palestine might in the course of time become “an overwhelmingly Jewish State.” During the Second World War, although most of his Cabinet colleagues rejected this idea, Churchill clung to it and on many occasions intervened with senior Cabinet Ministers to prevent “an Arab solution” of the Palestine question being permanently fixed.

On 19 May 1941, in a secret memorandum, he wrote of his hope for the establishment after the war of a “Jewish State of Western Palestine” with not only the fullest rights for immigration and development, but also with provision “for expansion in the desert regions to the southwards which they would gradually reclaim.”

His electoral defeat at the end of the war meant that he could not carry out the policies he had outlined and had to watch powerless as Labour’s Palestine policy was put into effect. In 1952, four years after the establishment of the State of Israel, Churchill wrote, comparing the Greeks and the Jews: “Centuries of foreign rule and indescribable, endless oppression leave them still living, active communities and forces in the modern world, quarrelling among themselves with insatiable vivacity.

“Personally I have always been on the side of both, and believed in their invincible power to survive internal strife and the world tides threatening their extinction.”