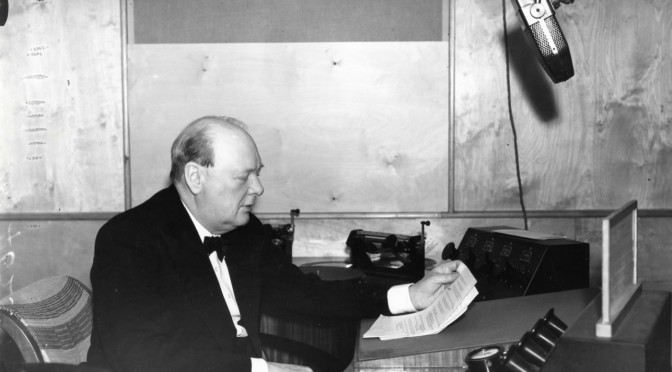 … in a fifteen minute broadcast to the United States on 8 August 1939, a broadcast spiced with irony, Churchill began: “Holiday time, ladies and gentlemen! Holiday time, my friends across the Atlantic! Holiday time, when the summer calls the toilers of all countries for an all too brief spell from the offices and mills and stiff routine of daily life and bread-winning, and sends them to seek if not a rest at least change in new surroundings, to return refreshed and keep the myriad wheels of civilised society on the move.”

And how, Churchill went on, had the world spent its summer holidays twenty-five years before. “Why, those were the very days”, he said, “when the German advance guards were breaking into Belgium and trampling down it people on their march towards Paris!”, hacking their way through a country “whose neutrality and independence they had sworn not merely to respect but to defend.”

Now, Churchill said, there was “a hush all over Europe, nay, over all the world”. Only in China was it broken by the continuing dull thud of Japanese bombs. The Chinese, he said, were fighting “our battle – the battle of democracy” They were defending “the soil, the good earth, that has been theirs since the dawn of time”, and defending it “against cruel aggression”.

Churchill went on: “Give them a cheer across the ocean – no one knows whose turn it may be next if this habit of military dictatorships breaking into other people’s lands with bomb and shell and bullet, stealing the property and killing the proprietors, spreads too widely, we may none of us be able to think of summer holidays for quite a while.”

What sort of a hush, Churchill asked his listeners, was “hanging over Europe”. Alas, he answered, it was “the hush of suspense, and in many lands it is the hush of fear”. His broadcast then continued: “Listen! No, listen carefully; I think I hear something – yes it was quite clear. Don’t you hear it? It is the tramp of armies crunching the gravel of the parade-grounds, splashing though rain-soaked fields, the tramp of two million German soldiers and more than a million Italians – ‘going on manoeuvres’ – yes, only on manoeuvres! Of course it’s only manoeuvres – just like last year! After all, the Dictators must train their soldiers. They could scarcely do less in common prudence, when the Danes, the Swiss, the Albanians and of course the Jews – may leap out upon them at any moment and rob them of their living-space ….”

The German and Italian armies, Churchill warned, might yet have “another work of liberation” to perform: “It was only last year they liberated Austria from the horrors of self-government. It was only in March they freed the Czechoslovak Republic from the misery of independent existence. It is only two years ago that Signor Mussolini gave the ancient kingdom of Abyssinia its Magna Carta. It is only two months ago that little Albania got its writ of Habeas Corpus”. No wonder, Churchill said, “that the Germans and Italian armies were tramping on when there was so much liberation to be done, and no wonder there is a hush among the neighbours of Germany and Italy while they are wondering which one is going to be ‘liberated’ next”.

The Nazis said they were being encircled, Churchill went on, but it was they who would have encircled themselves “with a ring of neighbours who have to keep on guessing who will be struck down next”. All depended upon Hitler, a man who, “in a single day”, could release the world “from the fear that now oppresses it, or in a single day can plunge all that we have and are into a volcano of smoke and flame”. If Hitler did not make war, Churchill ended, “there will be no war. No one else is going to make war.”