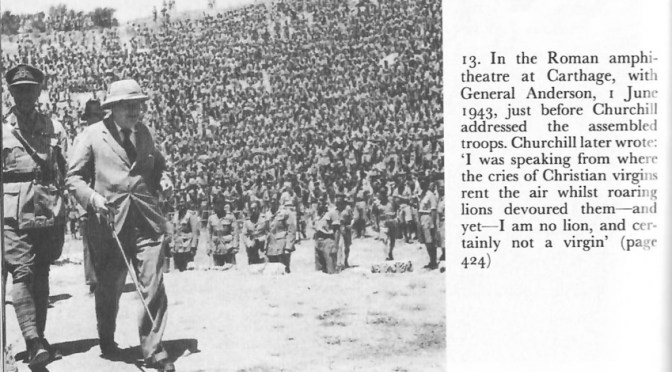 February 3rd marks the fifth anniversary of Sir Martin’s death and an opportunity to salute Hillsdale College Press who have now completed the Official Churchill with the final Biography Document Volumes. When he became ill in 2012, Sir Martin had nearly completed Volume 17, the year covering the documents of 1942 that support the penultimate Volume VII of the Biography, the 1941 – 1945 segment of Churchill’s life.

In late 2019 Hillsdale completed the series, publishing Volume 23, the final volume of documents that continues to the end of Churchill’s life, a dream Martin considered his “life’s work”. These final volumes follow the style, methodology and choice of documents as in the earlier volumes that Martin had worked as one of Randolph Churchill’s team, or compiled on his own. In successive newsletters we will focus on these final six volumes, 18 through 23.

When I last saw your General Bernard Freyberg, my friend of so many years of war and peace, the Salamander, as he may be called, of the British Empire, it was on those bare and rocky slopes to the South of Alamein where you were then preparing to receive what was expected to be a most dangerous and deadly thrust by the hitherto victorious Rommel. At that time, also, we had great doubts and anxieties as to the position in Russia, and what would happen in the Caucasus and in the approaches to the great oilfields without which the plight of Germany is grave.

But what a change has taken place since then!  By the immortal victory of the battle of Egypt, the Axis Powers, who had fondly hoped and loudly boasted they would take Egypt and the Nile Valley, found their Army broken – shattered; and ever since then, by a march unexampled in history for the speed and force of its advance, you have been driving the remnants of the enemy before you until now the would-be conqueror of Egypt is endeavouring to pass himself off as the “Deliverer of Tunisia”. These events will long live in the annals of war, and will be studied minutely by other generations than our own. These feats of arms entitle the Army of the Desert to feel a deep-founded sense of comfort and pride based on valiant duty faithfully done.

Now I come to find you here 1,400 miles from where I saw you last. And you may all feel that in that period a decisive change has taken place in the war, and that we now have a right to say that a term will be fixed to its intense exertions and sorrows. A transformation has come upon the scene. Just as after all those hundreds and hundreds of miles of desert you suddenly came again into a green and fertile land, so there has been a vast improvement in the fortunes of the whole world cause with its twenty-nine United Nations. Struggles and victories lie ahead. You will march into fairer lands. You will march into lands where the grim and severe conditions of the desert will be but memories; but having endured those conditions, the fighting qualities which you have displayed will only shine brighter and be turned to great advantage.

Far away in New Zealand, homes at the other side of the globe all hearts are swelling with pride at your deeds. It is the same throughout our small island of Britain, which stood alone for a year championed only by its children from overseas, and against dire odds. All are filled with admiration for the Desert Army. All are full of gratitude to the people of New Zealand who have sent this splendid Division to win fame and honour across the oceans.

On behalf of His Majesty’s Government, on behalf of all the peoples of the homeland, I give you our expression of earnest warm-hearted thanks. We cherish the memory of all you have done. We wish you Godspeed and God’s assistance in your further conquests. You can be sure that as your duty will not fail, so your success will be achieved.