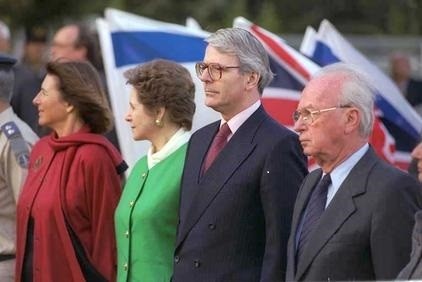 It was my good fortune to have met Yitzhak Rabin a number of times during the last twenty years of his cruelly truncated life. Our first encounter was during his first premiership, was when I was drawing the maps for the second edition of my Atlas of the Arab-Israel Conflict. It was shortly after the United Nations resolution of November 1975 equating Zionism with racism. I had drawn a map showing all the countries – among them all the Arab countries and all the Communist countries – that voted in favour of this pernicious resolution.

Rabin studied the map carefully for several minutes. I did not like the look on his face. Then he told me, with blunt frankness, that, by itself, this map would not do. It was essential, he said, to show the other side of the coin; to face the map of the anti-Israel nations with a map of those countries that had voted against the resolution. They were the ‘real’ countries, the great democracies, the countries with liberal and humane values.

Far from complaining about those who voted in favour of the resolution, Rabin urged that we should be proud that Israel was supported by so many decent countries, 35 in all, including Britain. How right he was. I did as he suggested, and it is one of the most important pairs of maps in the atlas.

I learned a lesson that morning that I never forgot; a lesson that Rabin continued to teach to anyone who would listen: that Israel was a country that had no need to hang its head in shame, or to regard itself as a pariah nation.

When, in July 1992, Rabin became Prime Minister for the second time, this point was an important aspect of his first speech in the Knesset. As he told the Israeli legislators:  ‘No longer are we “a people that dwells alone” and no longer is it true that “the whole world is against us.”’ ‘We must overcome the sense of isolation that has held us in its thrall for almost half a century.’

Rabin was a determined negotiator. He had held secret talks with King Hussein in London in 1985. His peace treaty with Jordan a decade later, negotiated in tandem with Shimon Peres, was a model of its kind. Land was returned to Jordan without an outcry. Rabin and King Hussein found a bond that he would never find with Yasser Arafat. It was a bond of men who had seen the harsh reality of war and were determined that their two countries would not go to war with one another again.

John Major became British Prime Minister at almost the same time that Rabin was returned to power in Israel. Sooner afterwards, Rabin came to London. He and Major were to have talks all morning, but the talks were postponed when Major had to go to Buckingham Place for an emergency discussion about the status of the Princess of Wales in the event of the Queen’s death. While Diana was separated but not divorced from Prince Charles: would she or would she not become Queen?

Major had to make an announcement about this in the House of Commons that afternoon and so Rabin was left with no morning talks. I was asked to look after him until Major could return from the Palace. I took him to the underground Cabinet War Rooms, a short walk from Downing Street.

Rabin was not amused to have been asked to be a tourist. He looked distant and annoyed. In the room used by Churchill and his War Cabinet, I pointed out that on the War Cabinet table was a desk calendar opened at the climactic day of the Battle of Britain. Rabin was motionless and unimpressed. I told him that I wanted to quote the text of one of the telegrams Churchill had sent that day.

Rabin looked totally disinterested. I then began quoting Churchill’s telegram. It was to the Mayor of Tel Aviv. Rabin looked vaguely interested. It was a telegram of condolence – Rabin was a little more attentive – sent by Churchill following the death of more than 100 Jews in an Italian air raid on Tel Aviv the previous day. Rabin was suddenly transformed. His face lost ten years. From bored passivity he moved in an instant to total engagement. And then he spoke. For half an hour he held us all entranced.

Rabin had been in Tel Aviv that day. He had just finished his morning swim and was walking home along Bograshov Street. As he walked he heard a roaring sound. The Italian warplanes were over his head, flying inland along the line of the street he was on. Then they dropped their bombs, only a few hundred yards in front of him. He was one of the first to come upon the scene of carnage. As news of the bombing spread, his father had come out to search for him, afraid that he might have been one of the victims.

We continued to walk around the Cabinet War Rooms. When we came to the charts showing the U-boat sinkings in the Battle of the Atlantic, Rabin questioned me intently about the details of the sinkings, and how closely Britain had come to being starved out. He asked me to send him more details of that moment – a black one in Churchill’s life – when it looked as if Britain would be brought to its knees. He was profoundly interested in the vulnerability of great nations, seeing parallels with Israel’s own vulnerability.

Two years later, in the summer of 1995, I accompanied John Major on his official visit to Jerusalem, Gaza and Amman. As a result of the Oslo agreements, Arafat had returned from Tunis and taken up his chairmanship of the Palestinian Authority. Rabin asked Major to impress upon Arafat that the imminent elections in the Palestinian Authority must be free and fair. In the discussion in Jerusalem, I was impressed by how wary Rabin was of the verbal and even written promises of Chairman Arafat.

Rabin was no man’s fool. He pointed out that Arafat had refused to make the pledge to abandon violence an integral part of the Oslo agreements. Instead, he had ‘relegated’ it to a separate letter between the two men. This, Rabin felt, was an ominous sign, putting, as it did, the promise an end to violence outside the formal framework of the signed agreements.

When I returned to Israel in the autumn of 1995, Rabin asked me to come and see him. He was in the Prime Minister’s office, smoking his usual heavy smokes and looking worried. The topic he wished to discuss was Islamic fundamentalism. What concerned him was this: that whenever an Islamist terror act took place, people saw it as a localised, far-distant, nothing-to-do-with them phenomenon. There was no recognition that this was a global phenomenon that affected all nations simultaneously.

Rabin spoke about a number of recent incidents, close in time but scattered geographically. He urged me to map them, and to stress in an explanatory text that these apparently diverse incidents were in fact linked. I was impressed by the strength of his conviction. Today we understand all too well, or ought to, what he was saying a decade ago.

When I said goodbye to Rabin that day, he was looking forward to his next visit to Britain. He told me that one pleasure he always had – after the formal dinners and speeches of any visit was over – was to get together over a glass of beer with the Mahalniks: the men and women in Britain who had gone to Israel in 1948, as volunteers, to fight in the War of Independence, when the very existence of the new state was in danger.

These men and women, the veteran Mahalniks, were Rabin’s special pride. He delighted in their company just as, almost half a century earlier, he had admired their courage.

On the day after Rabin’s assassination, I had, by chance, to speak at the annual Mahal reunion in London, an event planned many months earlier. In front of me in the hall were 40 or 50 elderly men and women who under Rabin’s command had experienced the heat of battle. They were tough and hardy types. But as I spoke a few words to them about Rabin’s life, from every part of the hall came a strange, unfamiliar, muted sound: of men and women weeping.

This article first appeared in Striving for Peace: The Legacy of Yitzhak Rabin, 2005, Labour Friends of Israel.

This piece is from Fathom’s eBook The Life and Legacy of Yitzhak Rabin, which can be downloaded here.