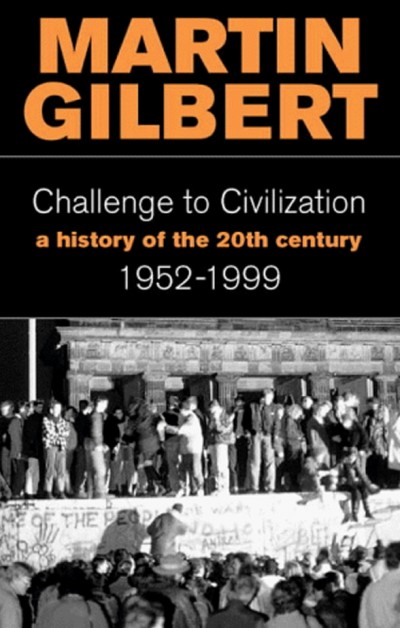 In 1952, the year this volume opens, the population of the world was approaching 3,000 million (three billion). In the second half of the century it had more than doubled, to six billion, of whom 1,000 million live in China and at least 950 million in India. Merely to maintain life at a minimum level had become a struggle for at least a quarter of the governments of the world. The refugee population had also doubled. At the same time, the destruction of the resources of the planet had increased. From fish in the oceans to trees in the rain forests, the failure of human restraint had begun to lead to irreversible changes in the ability of the planet to sustain the existing level of well-being. In many areas of the globe, that well-being is itself minimal.

1963: “On May 12, Kennedy decided to intervene, and ordered Federal troops to Birmingham. He also took steps to bring the local National Guard under Federal auspices. The Governor of Alabama, George Wallace, protested, but Kennedy was determined to put his support behind the forces of integration.

“When two Black students tried to enrol at the University of Alabama at Tuscaloosa, Wallace himself barred their way at the entrance. But on June 11, as Kennedy insisted that Federal laws be obeyed, and when the commander of the federalized National Guard ordered Wallace to stand aside he did so, and the two Black students were enrolled. That day Kennedy made another television broadcast – the method that was evolving as by far the most effective means of presidential communication. The troops of the National Guard had been used, he explained, and had had to be used, to enforce a federal court order to ensure the admission to university of ‘two clearly qualified young Alabama residents who happened to be born Negro’. Every American should ‘stop and examine his conscience about this and other related incidents.’  ”

“Every historian has his own perspective, derived from personal experiences and interest over many years, in my case over a period of thirty-eight years of research and writing. Some events are central to any presentation of a historical period, and it would be a rash writer who omitted them. This is true of many of the several hundred of the episodes in this volume such as the deaths of Stalin or Mao Tse-tung, the assassination of President Kennedy, the Vietnam War, or man's landing on the Moon. Hundreds more episodes are part of this narrative because they illustrate my general themes, or some aspect of the unfolding years. Events that made an impact at any given time may subsequently have faded from the public mind, and I have tried, in view of their importance when they took place, to include them, and also to include the names of those – now largely forgotten – whose names and stories bestrode the pages of the newspapers and whose images filled the television screens for their brief period of achievement or notoriety.”

“Deftly takes the reader through the incredible tangle of events and crosscurrents that has marked the development of this century.” Los Angeles Times