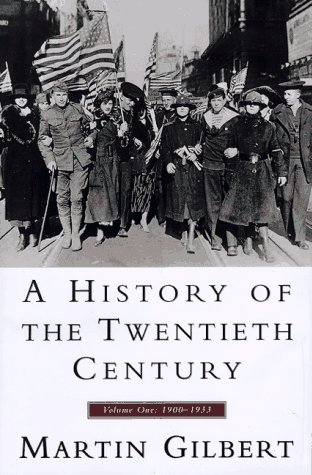 A comprehensive history of the first thirty-three years of the Twentieth Century, starting with the intervention of the Great Powers (including Britain, Germany and the United States) in China, and closing with Roosevelt as the newly-elected President of the United States and the inauguration of Adolf Hitler as Chancellor of Germany. The narrative flows, in rich and compelling prose, from continent to continent and country to country, conveying the dramas, struggles and achievements of nations and individuals, as well as chronicling the diseases and natural disasters of the first third of the century, the advance of science and medicine, wars, revolutions and political upheavals.

“On 10 January 1906 one of Britain’s most popular newspapers, the Daily Mail, coined a new word, ‘suffragette’. It referred to those women who, in search of the vote for women in national elections … were adopting increasingly outspoken, even violent, tactics. It seemed an anomaly to many in Britain, and not only to women, that, as the Twentieth Century moved forward, British women should not have the right to vote for those who were to govern the country. In New Zealand, women, including Maori women, had received the vote more than a decade earlier, in 1893. In Australia, women were entitled to vote in the federal elections from 1902; but, unlike the Maoris of New Zealand, the Aborigines of Australia were denied the vote until 1967. In the United States, where an all-male franchise was still in place, there had for many years been a strong tradition of campaigning for votes for women.”

“The often tragic fate of the ‘common man’, and woman and child, runs like a dark thread through these pages. There are also golden threads among them – the courage and perseverance of innumerable individuals, and the assertion of the equal rights of all nations, and of the rights of the individual, against the frequently crushing burdens of State oppression and military tyranny.”

“There can be few other contemporary historians who would be capable of such a work calling for so much knowledge and so resolute a control of a flood of disparate material.” Philip Ziegler, Literary Review

“Martin Gilbert is the most prodigious author of our time, a phenomenon who arouses envy among less productive professional historians …. I congratulate Gilbert on his good work and look forward to the next two volumes.” Paul Johnson, The Sunday Times

“Gilbert is one of Britain's most eminent historians and prolific authors …. His knowledge and scholarship make him in many ways ideally suited to write a history of our century and great insights emerge.” John Ramsden, Financial Times