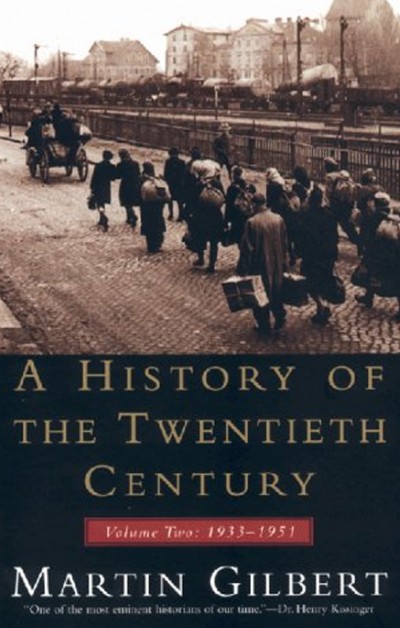 The story of the middle years of the Twentieth Century, starting with the rise of dictatorial and military regimes in Europe and Asia, spanning the Second World War, and culminating in the establishment of the Iron Curtain and the East-West divide. It examines, among other conflicts, the Japanese invasion of China, the Spanish Civil War, the long civil struggles in China, the use of the atom bomb, the start of the Cold War, the Berlin Blockade, and the Korean War. Science and medicine, civic advances, the final era of the Western Empires, apartheid in South Africa, and life under Communism, all have their place in the detailed panorama of those years.

1937: “... the advance of the Japanese forces along the Yangtse reached a climax with the entry of Japanese forces into Nanking, the former Nationalist capital, on December 13. This was the entry of a conquering army into a foreign capital, an event with which the world was to become familiar in the course of the next five years; but in 1937 it was something hardly seen since the First World War. With an intensity that shocked even those familiar with the savagery of war, the Japanese soldiers who entered Nanking attacked the Chinese civilian population in an orgy of destruction. The 'Rape of Nanking' was to take its place among the massacres not only of the century, but of modern times.”

“The breakdown of the short-lived era of peace after only two decades is a dominant facet of the story of the Twentieth Century. Another is the consolidation and spread of totalitarianism, bringing with it persecution and war. If totalitarianism stalks the pages of this volume, it does so as an echo of the insistence with which it dominated the lives of so many hundreds of millions of people, and destroyed so many millions of lives. …

“The years covered by this volume are dominated by the struggle between the rule of law and lawlessness; between the rights of the individual and the destruction of those rights. In 1937 President Roosevelt asked, of the people of the world: 'Surely the 90 percent who want to live in peace under law and in accordance with moral standards that have received almost universal acceptance through the centuries, can and must find some way to make their will prevail.' Roosevelt added: 'It seems to be unfortunately true that the epidemic of world lawlessness is spreading.' ”

“No contemporary historian chronicles the past on such a prodigious scale …. The book is, as usual, a monument to superhuman scholarship, global in scope, but bristling with personal detail …. A humane and liberal account of our time.” Piers Brendon, Mail on Sunday

“Wonderfully fluent prose and vividly selected evidence …. Gilbert's technique grips the reader with a terrible power: like the annals ascribed to Confucius, his history is a catalogue of follies and evils which grow in horror as they are starkly told and tolled.” Felipe Fernandez-Armesto, The Times