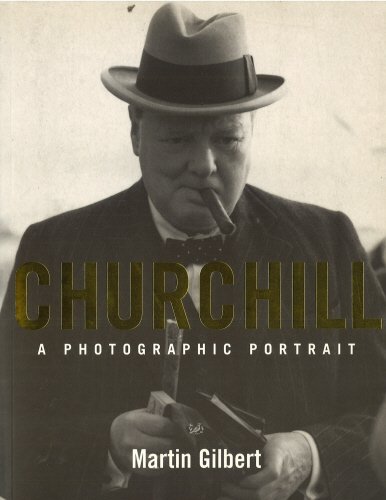 This is a fascinating portrait of Churchill – a portrait which combines many personal and political facets of a long and stormy career. Churchill is revealed in both serious and light-hearted mood, while quotations from his letters give an absorbing glimpse of what was often passing through his mind – of his personal thoughts in moments of dangerous military action, or of intense political excitement.

Illustration Number 272:
“On 9 August 1941, while the United States was still neutral, Churchill met Roosevelt on board the
'Augusta' in Placentia Bay, Newfoundland. It was their first wartime meeting. In this photograph,
Roosevelt is supported by his son Elliott; Churchill is handing Roosevelt a letter from King George
V. During their meeting, Churchill and Roosevelt discussed the whole future conduct of the war.”

“My aim in these pages has been to portray, in a single photographic volume, something of a variety
and span of Churchill’s life; to show him in many different moods, and on many diverse occasions.
Although not all major incidents of Churchill’s long career were recorded in photographs, or even
drawn by cartoonists, it is still possible to present, in visual form, a surprisingly large number of
specific events from all periods of his life.”

'A marvellous visual history. Churchill became more and more photogenic as time went by and there usually seems to have been a photographer at hand when he was busy making history. The result is always interesting and often memorable.' Oxford Times