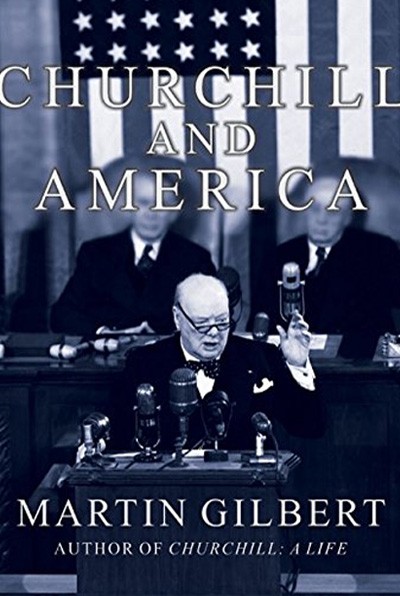 “The story of Churchill and America spans ninety years. The special relationship he felt with the United States, and strove to establish – not always successfully – remains a central aspect of international relations. ‘Whatever the pathway of the future may bring,’ he told an American audience in 1932, ‘we can face it more safely, more comfortably, and more happily if we travel it together, like good companions. We have quarrelled in the past, but even in our quarrels great leaders on both sides were agreed on principles,’ Churchill added: ‘Let our common tongue, our common basic law, our joint heritage of literature and ideals, the red tie of kinship, become of sponge of obliteration of all the unpleasantness of the past.’ ”

July, 1940: “Before taking action against the French warships at Oran, Churchill instructed the British admiral outside the port to open negotiations with his French counterpart. One offer was that the French ships sail to the United States for the duration of the war, their crews being repatriated to France if they wished. When negotiations failed, the British warships opened fire. It was one of the hardest, and harshest, of Churchill's wartime decisions. More than 1,250 French sailors, Britain's allies of two-and-a-half weeks earlier, were killed, and most of the ships disabled. Seven months later Roosevelt's personal emissary to Churchill, Harry Hopkins, told a member of Churchill's Private Office that it was Britain's action at Oran that convinced Roosevelt, in spite of Ambassador Kennedy's 'defeatist opinions,' that Britain would continue to fight.”

“These pages tell the story of Churchill’s lifelong 'true love' of the United States. It was a love affair that began with his first visit to New York in 1895 and was still in evidence during his final visit in 1961. At the beginning of 1942 Churchill told King George VI that Britain and the United States 'were now “married” after many months of “walking out.” ' As with all close and sustained relationships, it was replete with ups and downs, uncertainties and disagreements, even anger, but its high points were sustained and remarkable, and of deep benefit to both nations. Churchill's determination to maintain, repair, strengthen and make full use of the ties between the two countries is unique in the annals of Anglo-American relations.”

“In a masterly synthesis, Gilbert puts Churchill's never entirely easy relationships with Presidents Roosevelt, Truman and Eisenhower in the right context – nothing less than the survival of democracy in Europe. Churchill's encounters with the likes of Bernard Baruch, William Randolph Hearst, Ethel Barrymore and a near-lethal car on Fifth Avenue are all here, but it is the political context that is most valuable ….” Sir Harold Evans, author of The American Century

“The best investigation of Churchill's love affair with the American people.” The New York Sun