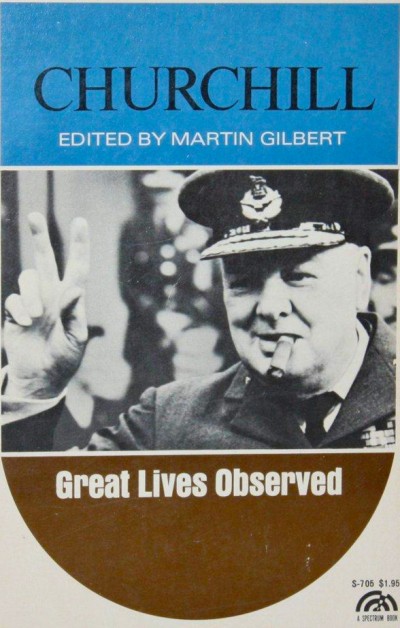 Part of the Prentice-Hall Great Lives Observed series which combines the intimacy of
autobiography, through Churchill’s own words, the immediacy of eye witness observation, through
the words of his contemporaries, and the objectivity of modern scholarship of analyses in retrospect,
by leading historians, political scientists, and politicians to create a three-fold perspective on
Churchill’s life and times.

From a speech broadcast on April 9, 1963 by President John F. Kennedy on granting Winston
Churchill Honorary Citizenship of the United States:

“Whenever and wherever tyranny threatened, he has always championed liberty. Facing firmly
toward the future, he has never forgotten the past. Serving six monarchs of his native Great Britain,
he has served all men's freedom and dignity...

“In the dark days and darker nights when England stood alone – and most men save Englishmen
despaired of England's life – he mobilized the English language and sent it into battle. The
incandescent quality of his words illuminated the courage of his countrymen. ...

“Now his stately ship of life, having weathered the severest storms of a troubled century is anchored

in tranquil waters, proof that courage and faith and zest for freedom are truly indestructible. The
record of his triumphant passage will inspire free hearts all over the globe.”

“He believed in the responsibility of the State for all its subjects, despite the pressure in the opposite
direction which his social standing and environment might well have dictated. He served his
country to the best of his ability in peace and war through sixty years. He warned of danger when
he believed danger to be near and inspired courage when courage was needed. He always believed
in democratic institutions and fought fearlessly to preserve them. He hated intolerance and
injustice. He survived the accumulated malice of four decades to win the affection not only of
Englishmen but of free men everywhere. … He dominated the world he lived in, not by tyranny
but by his abilities and his opinions.”