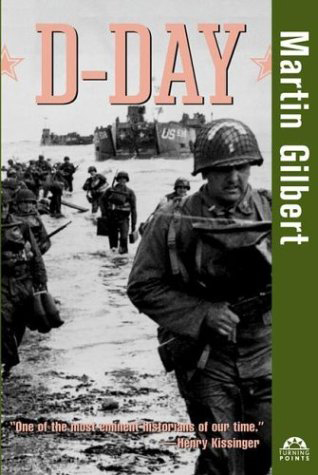 It was the most massive, complex, and spectacular amphibious assault ever attempted – the long – awaited turning point in the bloodiest and most savage war in history. But when 7,000 ships, 11,000 aircraft, and 150,000 troops converged on the coast of Normandy on 6 June 1944, the outcome of the attack, code-named “Operation Overload”, was far from certain.

This study of the origins of the D-Day Normandy landings of 6 June 1944 focuses on both the day itself and its aftermath, including the role of the Enigma/Ultra secret, and the Allied deception plans. Every aspect of the preparations is examined, as is each phase of the landings themselves, in the air, at sea and on land. Many personal stories of those who participated in the planning and execution of the Normandy landings of 6 June 1944 are woven in.

“As this vast armada drew ever closer to the Normandy beaches, a new series of deceptions was launched to draw German attention to other possible destinations. … the largest of the four, Operation Taxtable, was twofold: the dropping of dummy parachutists near Boulogne, together with the dropping over the Channel of tens of thousands of radar- jamming metallic strips, known as Window. These strips were dropped in such a way as to produce on German radar screens the appearance of a large, slow-moving convoy making its way across the Channel toward the Pas-de-Calais. … The operation had to be timed to perfection so that the clouds of metal strips, dropped at precise intervals by successive waves of aircraft, gave the impression to the German radar watchers of the steady approach of shipping at a speed of nine knots.”

“My aim in these pages is to show how that turning point in history came about. The period of preparation, lasting almost two years – amid the strains and uncertainties of war elsewhere – was one of the inventiveness, hard work, experimentation, secrecy, and wide-ranging deception plans.”

“The finest short overview of Operation Overlord – the greatest amphibious assault in the history of warfare – is undoubtedly Sir Martin Gilbert's D-Day, a stunningly impressive account. As might be expected from Churchill's biographer, Gilbert is masterly on the grand strategic vision behind the Allied invasion of Normandy, but he also concentrates on the tremendous human story on the ground. Two sentences from this book actually moved me to tears when I read them, coming soon after a harrowing description of the often hand-to-hand fighting two miles behind the Sword and Gold beachheads” Andrew Roberts, London Evening News

“Good, short, excellent…. If you want just one D-Day book, this should be it.” The Spectator