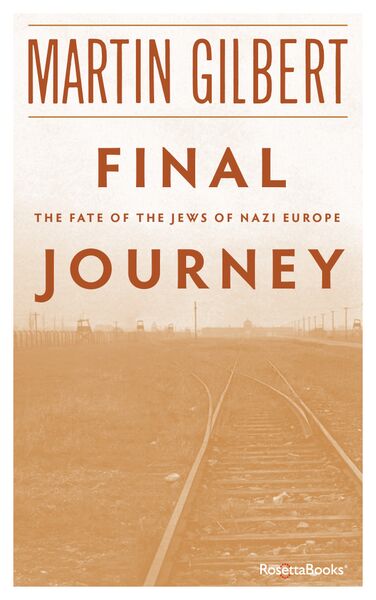 One of the earliest published historical accounts of what came to be known as the Holocaust, set out in twenty-two episodes or aspects, from The Netherlands and France to Romania and Greece, based on the records kept by eyewitnesses of both the Germans and the Jews.

“On 30 August 1942 a German non-commissioned officer, Wilhelm Cornides, was in Rzeszow, on his way to Chelm by train.  In his diary he recorded that a railway policeman had told him that 'a marble plaque with golden letters will be erected on 1 September, because then the city will be free of Jews'.  The policeman also told him 'that the trains filled with Jews that pass almost daily through the shunting yards, are dispatched immediately on their way, and return swept clean, most often the same evening'.  Some 6,000 Jews from Jaroslaw, the policeman added, 'were recently killed in one day'.

“... From Rawa Ruska, Cornides took the afternoon train to Chelm.  The things he learned on this journey were so extraordinary that he made three separate entries in his diary within an hour, the first at 5.30 pm.

“...'6.20 pm.  We passed camp Belzec.  Before then, we travelled for some time through a tall pine forest.  When the woman called, “Now it comes”, one could see a high hedge of fir trees.

“ 'A strong sweetish odour could be made out distinctly.  “Oh nonsense, that is only the gas”, the railway policeman said laughing.  Meanwhile – we had gone on about 200 metres – the sweetish odour was transformed into a strong smell of something burning.  “That is from the crematory”, says the policeman.' ”

“The stories told in these pages are based on eye-witness accounts and on contemporary evidence.  Wherever possible, I have given the precise date of every document quoted and have cited the actual words used at the time, both by the Nazis and by their victims.

“I have tried to tell the stories of individuals, as well as of communities.  On their own, the statistics are powerful and terrible.  But the story of the Nazi attempt to murder the Jews of Europe concerned individual people; people with names, families, careers and futures, for millions of whom no one survived to mourn or to remember.”

“Mr Gilbert's book is the best conspectus of the Holocaust yet published.  For anyone still unaware of the nature of Germany's war as a campaign directed not essentially to the acquistion of territory but to the eventual enslavement, torture and destruction of a vast proportion of the world's population, and to the self-degradation of the German people and their only too-willing allies in Europe's most 'civilised' nations, towards sadism, reification and nothingness, this book will be a relevation.”  The Tablet

“This book is without doubt a work of significance in as much as it shows clearly and concisely the depths of depravity that man is capable of reaching, but more than that it is to my mind a story that has become part of our history and yet, it is one which is gradually passing out of history because of its horrific enormity.  Mr Gilbert has written an eloquent, moving definitive account of the final journey and by so doing he has contributed greatly to history.”  Anthony Hartwell, Sheffield Spectator