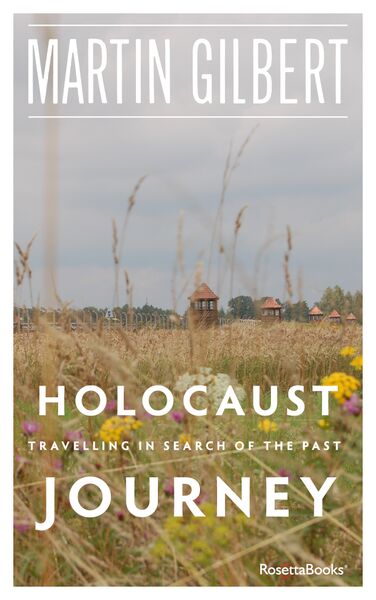 This extraordinary and powerful book describes a fourteen-day journey made by the historian Sir Martin Gilbert and a group of London University students of the Holocaust to many of the sites associated with Jewish history before and during the Second World War.  A geographic pilgrimage which is also an excavation of history, this graphic text touches many chords … By visiting many formerly flourishing Jewish communities and seats of learning, the travellers discover how echoes of the past still linger.  The horrors of years ago are brought into the present day as the travellers stand at the sites of some of the worst crimes against humanity.  Through his selection of places, events and readings, a trip that might only have offered a snapshot delivers instead a complete panorama.

“Our destination is Nos. 56-58, the lakeside villa, build in the First World War.  There, on 20 January 1942, Reinhard Heydrich, then aged thirty-seven, introduced the 'Final Solution' – which had already been decided upon – to the various ministerial bureaucrats who would have to take part in carrying it out.  Heydrich's assistant at the meeting was his contemporary, Adolf Eichmann, just two years his junior.

“The meeting was one which brought together the two centres of power in Nazi Germany, the RSHA (the Reich Security Main Office) represented by Heydrich and five others – plus a female secretary – and the Nazi Party and German government, represented by seven people from different ministries, among them the Ministry of Transport, which was to have such an important part in the deportations.

“... The fourteen people – including the female secretary – who gathered around the table here listened as Heydrich told them that the struggle waged against the Jews 'so far' had first involved the expulsion of the Jews 'from various spheres of life of the German people'.  It had been followed by the expulsion of the Jews 'from the living space of the German people'.  Now, as a result of what he called the 'pertinent prior approval of the Führer', the 'evacuation of the Jews to the East' had emerged 'in place of emigration' as a 'further possible solution'.  But both emigration and evacuation were, he explained, to be considered 'merely as a measure of expediency'.  From them, experience could be gained which would be of importance 'in view of the approaching final solution of the Jewish question.' ”

“Halfway through the first year of the newly introduced Holocaust MA degree at University College, London, my students asked me if I would take them, once term was over, to some of the places we had been learning about.  It was an unexpected proposal, but an intriguing one.  I set about preparing an itinerary, and we made the journey in the summer of 1996.  It lasted two weeks.

“... The material I prepared for the journey related to the history of the places we would visit, both before and during the war.  We would be in cities and towns which had experienced an important and creative Jewish past, as well as destruction.  We would also be making our way to the sites of ghettos, concentration camps and death camps, where the written and oral evidence that has survived was painful to read out.  The plan was for me to read aloud from letters, documents and memoirs that related to what had happened at the places we were visiting or passing through.

“... I have added to the text of the diary a few thoughts and comments – clearly indicated as such – from letters which members of the group sent me after our return, about specific moments on the journey.  I have also brought together some of their reflections in the epilogue, which I compiled during our frequent reunions.”

“The achievement of Gilbert's Holocaust Diary is to reduce to comprehensible, human terms, the scale of genocide that is to many still unimaginable.”  Literary Review