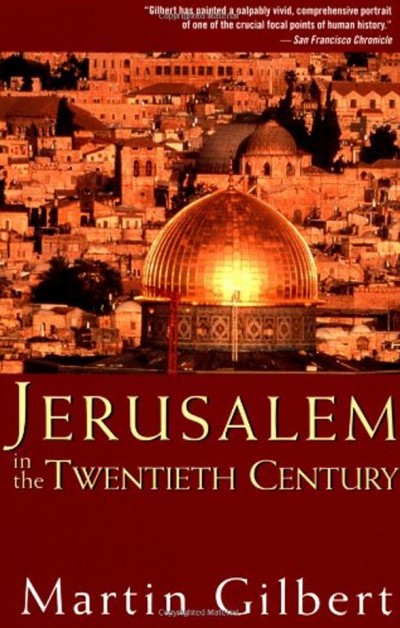 “When the Twentieth Century opened Jerusalem was a small provincial town of the Ottoman Empire, one of the towns furthest from the imperial capital, Constantinople. It had a population of only 70,000, of whom the majority, 45,000, were Jews, and 25,000 were Arabs. As the Twentieth Century draws to a close Jerusalem is the busy capital of an independent nation, Israel, with a population of more than half a million, a quarter of whom are Palestinian Arabs.

“… It is, in addition, as it has been for so many centuries, the ‘Holy City’, the centre of religious worship for both Judaism and Christianity, and an important religious centre for Islam, figuring immediately after Mecca and Medina as a focal point of the Muslim world.”

“Most significant of all the Jewish developments in Jerusalem in the early years of British rule was the opening of the Hebrew University on Mount Scopus in the spring of 1925. … The inauguration ceremony took place on 1 April 1925. It was held in a specially constructed amphitheatre overlooking the Judean Desert. … Balfour told the 7,000 invited guests of the great future he envisaged for the new university. The Hebrew national poet, Chaim Nachman Bialik, also spoke.”

“Meeting in Vienna early in 1994, Israeli and Palestinian officials exchanged views on what they described as 'the future status' of Jerusalem. On 16 August 1994 these talks were resumed in Casablanca and a week later moved to Marrakech. As part of the Oslo Agreements of that year between Israel and Yassir Arafat's Palestine Liberation Organisation, Israel publicly recognised that the future status of Jerusalem was something that must eventually be brought to the negotiating table, and in the not too distant future.”