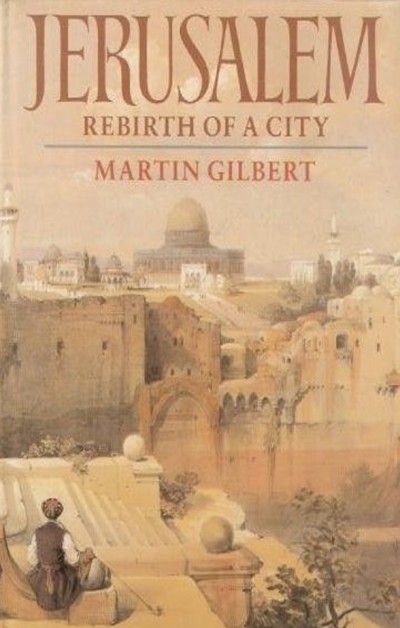 In 1838, Jerusalem was desolate and forsaken, a remote provincial town of the Ottoman Empire which pilgrims visited at their peril.  By 1898, it had been transformed into a modern city in which six European powers – Russia, France, Britain, Germany, Austria-Hungary, and Italy – had each established their political presence.  Its holy sites had been rebuilt, systematic archaeological excavations had begun, new churches, monasteries, convents, synagogues and mosques proliferated.  The population had trebled, and immigrants hurried to its new prosperity and safety.  This book tells the story of those sixty turbulent years and explains not only the rediscovery and revival of one of the most famous cities of the world, but also the way it which the seeds of Twentieth Century dissension were sown.

1898:  “Herzl was never to see his dream:  he died eight years later, at the age of 42.  But Jerusalem, already transformed, already showing so many of the signs of a modern city, was now an integral part of the political conflicts and emotional longings of the new century.  Jew, Arab, and European, Christian and Muslim, inhabitant and visitor, had built up the city, and given it its character.  None were to find it perfect; each was to seek to change it; few were to leave it in peace; but all were to cherish its golden glow.”

“I am also grateful to Shlomo and Irene Gotman, formerly of Leningrad, and to Eitan, Alexandra and Miriam Finkelstein, formerly of Vilna, who, coming to Jerusaelm after many years of struggle, allowed me to re-explore the city with them, and to re-tell the stories unfolded in these pages to those for whom Jerusalem's sites and stones had long been but a dream.”

“His mastery of the source material and his skilful use of these materials produce a riveting, charming and moving account – proving that Mr Gilbert is not only a first-rate historian, but a good storyteller.”  Washington Times