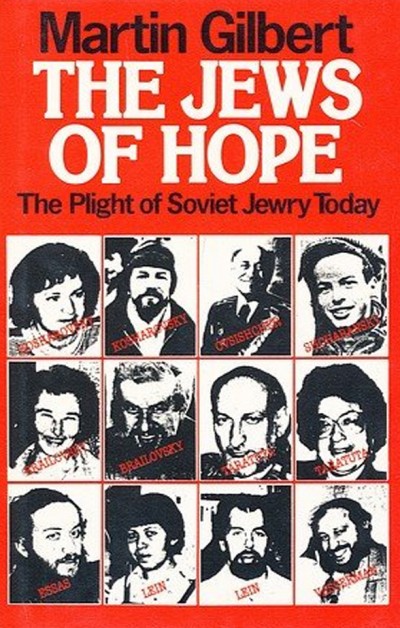 Published in early 1984, this book recounts the two-week journey to Moscow, Leningrad, and Minsk that Martin Gilbert made the year before to visit Jews who had been refused exit visas to leave the Soviet Union.  This book is the story of a few of those “refuseniks” who bravely persisted in their hopes, and, deprived of their jobs, separated from their families, imprisoned, or exiled in Siberia on false charges, they suffered for those hopes at the hands of the Soviet authorities.

“Inevitably, Jews in the Soviet Union today are senstive to such distortion, and to the efforts made in the press, in books and elsewhere to portray them as alien from the true pattern of Soviet historic experience, life and aspirations.  Thie method used is both a denial of Jewish historic suffering, and a linking of Jewish national aspirations with an alleged sinister Zionist conspiracy to undermine the Soviet Union.  'Zionism' – which for Soviet Jews means only the wish to be a part of the Jewish National Home – is portrayed as a sinister force, whose tentacles have spread out from the Middle East to the very heart of Mother Russia:  a source not only of corruption, but of treason.

“Each week, and at times almost daily, press articles, television programmes and wall posters portray Israel as a brutal, even a neo-Nazi State.  It is a deliberate attempt, one refusenik commented, 'to try to create a revulsion in Jewish minds, a revulsion against going to Israel'.”

“This book is the story of some of those Soviet Jews whose hopes have been roused and whose Jewishness has been reborn, but who are now faced by the bleak prospect that they may never be allowed to leave, that their Jewishness will be crushed.  It is a personal account, based upon a journey, and upon conversations with a few remarkable individuals.  For each story I have recounted here, many others could be told, reflecting similar activities, similar aspirations, similar suffering and similar courage.  Other stories, which I should have liked to tell here, or people whom I should have liked to name, must, for the time being a least, remain untold, and anonymous.”

“... an introduction to a little known sphere of Soviet life.  It is grim, even harrowing at times, for the 'refuseniks' have suffered harrassment, imprisonment, intimidation, loss of employment and separation from family and friends.  Their spirit has not withered.  Their unshaken and unshakable hope is perhaps the one encouraging note that the book strikes.  This is an intensely personal book, for Gilbert identifies absolutely with the 'refuseniks'.  He is also aware of the vibrancy of Jewish life in pre-revolutionary Russia, which gives the book a historical perspective.  The 'refuseniks' themselves share this awareness of the past, and an astonishing feature of their outlook is the burning desire to rejoin the past in Israel.”  Lionel Kochan, British Book News

“For a book dealing with such a solemn subject, the Jews of Hope is both entertaining and persuasive.  This is undoubtedly because the author, the same historian who is chronicling the life of Winston Churchill, uses the journalistic technique of verbatim reporting … Martin Gilbert not only amplifies the cry for help.  He answers it in passing it on.”  Cambridge Evening News