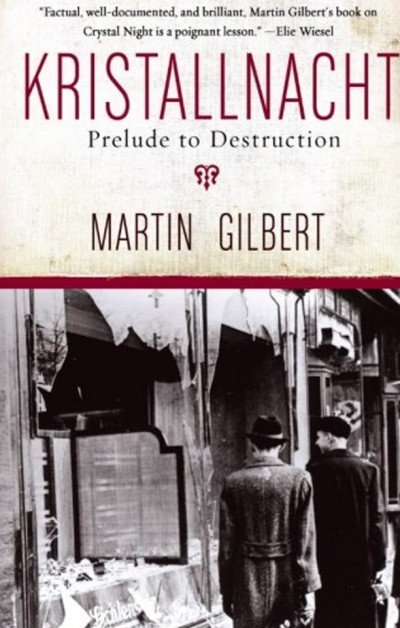 Starting in the early hours of 10 November 1938, and continuing until nightfall, violence against the Jews of Germany was unleashed in a whirlwind of destruction. Within a few hours more than a thousand synagogues were set on fire and destroyed. Where it was thought that fire might endanger nearby non-Jewish buildings, the rioters smashed the synagogues with hammers and axes. This was no spontaneous outburst of destruction, but a coordinated, comprehensive rampage.

In the streets Jews were chased, reviled and beaten up. Tens of thousands of Jewish shops and homes were ransacked. Jews were attacked in every German town, from the capital, Berlin, to the smallest towns and villages in which Jews lived throughout Hitler’s Reich. In twenty four hours of violence, ninety-one Jews were killed.

Within those twenty-four hours, more than 30,000 Jewish men between the ages of sixteen and sixty – a quarter of all Jewish men still in Germany – were arrested and sent to concentration camps. There they were tortured and tormented for several months. More than a thousand died in these camps. The name given to the night and day of terror was ‘Kristallnacht’: the Night of Broken Glass.

“Five hundred Jews were arrested in Munich on November 10. During the day it was announced that all the Jews in the city had forty-eight hours to leave Germany. Some tried to drive away from the city in their cars, but the petrol stations refused to serve them with petrol. It was a hundred miles to the Swiss border, but the Gestapo seized many passports, so that the foreign consulates in the city were unable to issue visas. When asked where they could go without passports, the Gestapo replied, as reported by a British journalist in the city: 'Well, they will have to shoot you all at the frontier.' ” (News Chronicle, 11 November 1938)

“I enjoyed the book I picked it out for a book report. So I had to outline and write about the whole novel. It gave me an insight on the Holocaust and let me understand how great America really is. The eye witnesses inside of the novel help the reader tremendously. The book was great and had jaw dropping information. It changed my perspective on how the government is in charge. The book shows you how something can evolve out of nothing.” Adam Raggi (15)

“Kristallnacht was the prelude to the destruction of a whole people, and an indication of what happens when a society falls victim to its baser instincts.”

“Martin Gilbert's book tells the story of these horrifying events from the viewpoint of their Jewish victims, whose testimonies, in diaries, letters, memoirs and interviews he weaves together skilfully to produce a shocking narrative.” BBC History Magazine