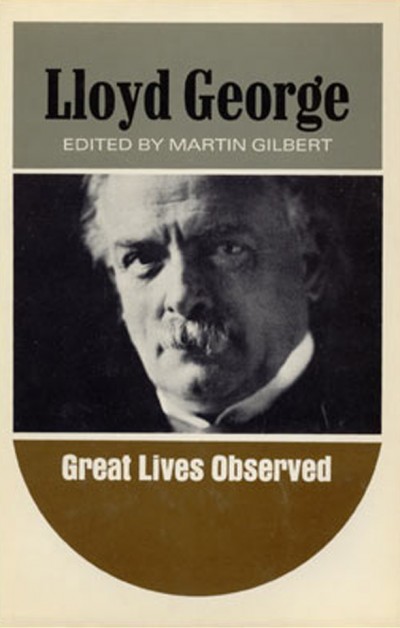 Part of the Prentice-Hall “Great Lives Observed” series which combines the intimacy of
autobiography, through Lloyd George’s own words, the immediacy of eye-witness observation,
through the words of his contemporaries, and the objectivity of modern scholarship of analyses in
retrospect, by leading historians, political scientists, and politicians to create a three-fold
perspective on Lloyd George’s life and times.

Extract from Sir Colin Coote: “No Principles at all”:

“I got into trouble not long ago for having written that L. G. was in every way inferior to Asquith,
save as an actor. This was too harsh and summary a judgement. We soldiers returned from the war
with something very like hero worship for him. His courage had shone in the darkest hours. He
had got us the tools to finish the job. His charm in private was mesmeric and exercised over both
sexes. He could speak with the tongues of men and of angels. The fertility of his mind was
immense. But I must speak of him as I found him ….”

“In retrospect, it is possible to see the impressive nature of his genius and of his achievements.
Lloyd George's career was dominated by his personality; a rich blend of imagination, enthusiasm,
bluntness, and energy. He was one of the most hard-working, fast-thinking men who have held high
political office in Britain. His career was full of many apparent inconsistencies. It is for the reader
to judge whether he acted according to principles which were constant, or emotions which were
contradictory.

"The indefatigable, Mr Gilbert here edits yet another style of history source-book. The idea is to give a continuing vignette of Lloyd George both through his own words and the words of those close to him." Times Educational Supplement

"Lloyd George is the subject in the latest offering in the Great Lives Observed series from Prentice Hall International. Martin Gilbert, editor of the previous book in the series (on Churchill), presents Lloyd George's own words, the views of his contemporaries and analyses in retrospect by leading historians and political scientists." Bolton Evening News